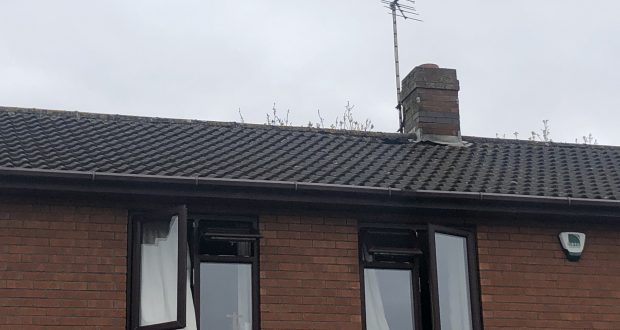 The lightning strike only caused slight damage to the roof but started a fire in the loft.

A family of three had to evacuate their Spalding home after lightning set the roof on fire on Sunday night.

The family, who wish to remain anonymous, were in their Ambleside Drive home when the incident happened at around 9pm.

Amid a large thunderstorm, the lightning came through the roof via the TV aerial, setting the loft alight.

Thankfully the family were able to escape uninjured.

Firefighters from Spalding were on the scene within minutes and were able to stop the fire spreading to the rest of the house and extinguished it using hose reels and breathing apparatus.

Lincolnshire Fire and Rescue described the damage to the loft as “moderate” though the family told The Voice safety work would have to be carried out to ensure they could return to the home and they were staying with a family close-by.

The family also thanked the firefighters for their swift response and being able to stop the fire from spreading.

One neighbour has set up a fundraiser on Facebook to raise money for the family.

Steve Clarke set up the ‘Let’s get them home!’ page and is asking for donations to go to the family.

He said: “Our neighbours’ property was struck by lightning and subsequently caused a house fire.

“The house is no longer somewhere they can live and they are trying to find emergency accommodation as the house needs repairs!

“While insurances will cover most costs, we would like to show our support to them and raise such a nice family some funds to help with the things that won’t be covered!

“Please, please help and give your support!”

LETTERS – Should be able to give WFP back

LETTERS – Why can’t money be borrowed?

LETTERS – Thanks for support over the past years