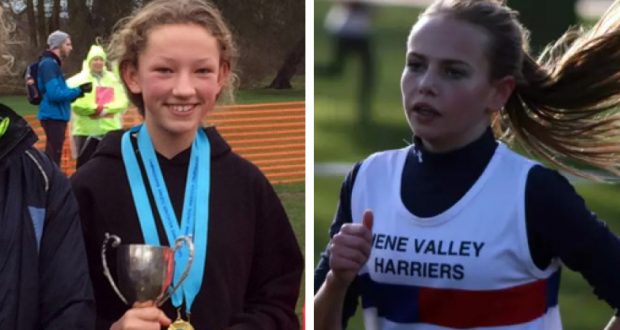 Nene Valley Harriers are rapidly becoming the team to beat in The North Midlands Cross Country League after another fine showing in the penultimate fixture of the season at Heanor.

The muddy Shipley Park course seemed to suit the Nene Valley ladies, and they remain in contention for end of season honours in all age groups – from under-13 upwards.

The under-15 girls finished second on the day, and sit second in the team standings. Flo Brill ran well to take fifth place, receiving sterling support from Katie Tasker and Elisha Foord.

Lottie Hemmings secured fifth place for the under-13 girls, two positions ahead of Chelsea Bole, while Josie Knight finished 12th.

The Harriers finished fourth on the day, and lie fifth overall.

Meanwhile, the under-17 girls are still in with a chance of winning the league, and are currently second behind Derby AC.

Evie Hemmings was the only Nene Valley athlete contesting the under-11 race and had one of her best runs to date coming home tenth out of 29 youngsters.

Hugo Brill provided one of the day’s highlights finishing as runner up in the boys under-13 race.

Brill has a fine role model in older sister Flo who has been staring for the club for several years.

Aaron Hunt led the Nene Valley charge at under-17 level with a seventh place finish, helping his team to fourth – one position below their overall league placing.

Felix Bowling made light work of the thick mud, coming home 15th for the under-11 boys.

Peterborough AC again highlighted their strength in the senior men’s race as they came in third and retained second place in the league.