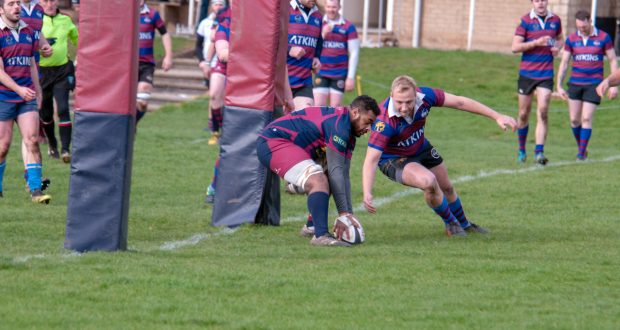 STAR OF THE SHOW: Ash Anker touches down one of his tries. Photo by ADRIAN SMITH

Resurgent Spalding RFC romped to a massive 74-14 victory over Rolls Royce on Saturday to keep their faint hopes of finishing in the top two of Midlands Three East (North) alive.

Ash Anker was the star of the show for Town with four tries at the Memorial Field on a day they had already won their try bonus point after a quarter-of-an-hour.

Indeed, by half-time Rolls Royce were dead and buried trailing by 50-0 after one of the Elephants’ best halves of rugby in recent memory.

With injuries and suspensions, the team saw Josh Caley returning at hooker, Jason Steels starting and young Ed Williams featuring on the flank.

The opening few minutes saw Rolls Royce struggling to get out of their half.

In contrast Spalding were looking sharp getting to the breakdown quickly, clearing out and driving forward

It was Anker who opened the scoring as he carried strongly, side stepped a defender and was under the posts for a try converted by Conall Mason

Spalding’s pack now took Rolls Royce apart with their quick rucking and carries – and prop Harry Cole duly reached out for the line.

Anker then grabbed his second try as he broke two tackles and scrum-half Will Shields followed up by darting through to score.

And with only 15 minutes played and with four tries scored, the scoreboard read 24-0 in Town’s favour.

Play then settled into a more normal pattern. Spalding’s scrum was solid, but steadily gained the upper hand while Mark Haighton was ruling supreme in the line-out. But Rolls Royce were hanging in there.

GETTING STUCK IN: Physical match action as Spalding RFC and Rolls Royce do battle at the Memorial Field on Saturday. Town ran out easy winners. Photo by ADRIAN SMITH

However, the visitors were still struggling to contain the speed and movement of Town’s back row of Williams, Steels and Ryan Chappell.

Steels soon sliced through the visitors’ defence to extend the home lead.

With the referee ready to blow the half-time whistle, Anker chalked up his fourth try, a remarkable performance, and Spalding’s lead had extended to 50 points.

It would be difficult for Spalding to keep up the momentum as Rolls Royce looked to get some pride back, but fly-half Willis Ingleby scored a superb individual try as be broke from the half way line.

With the visitors’ defence lined up, he kicked behind and collected the ball to score.

Soon after, the away side eventually scored their first try as their captain bundled his way over the line.

But Spalding were now throwing the ball about in the backs, stretching a tiring opposition and full-back Mason was the beneficiary.

He also had a good afternoon kicking seven conversions amid tricky and windy conditions.

Rolls Royce responded with a converted try but Spalding were not finished as Sharman grabbed his second of the afternoon.

With the forwards now dominant, a couple of balls were won against the head and it was Town prop Kev Hudson who finished off the afternoon with a rare try as he drove forward and stretched out to score.