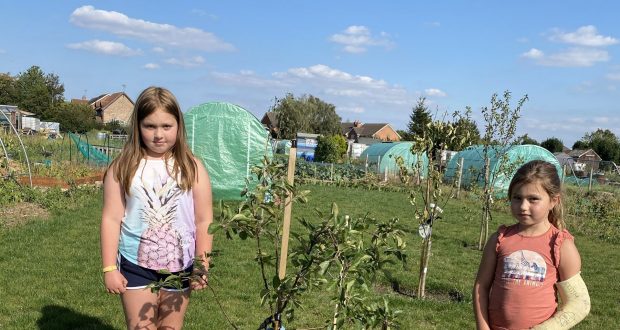 Lola (9) and Lacey Smith (7) have been helping out at the allotment.

A family who look after an allotment taken on as a retirement present say their enjoyment of it has been spoiled by crime.

After going on a waiting list, Tim Smith was given a plot on Horseshoe Road in Spalding as part of a retirement present.

Tim says the whole family love getting involved in the land for which there’s an around six month waiting list.

But that enjoyment has been tempered by petty crimes such as and including veg being taken and a shed they erected being broken into.

Tim said: “We’ve loved having the allotment and the whole family has got involved in helping maintain it.

“It’s particularly good for the kids, I’ve got two who enjoy going down there and helping out.

“But it’s a shame there’s been so much crime.

“Last year we put a shed up, and it’s one of many that’s been broken into.

“We’ve had vegetables taken too. Why steal onions that you can buy for 49p from Aldi?”

Tim hopes more will be done to protect the allotments.

“I wonder if the local authority could have ore interest in securing them,” he said. “I appreciate it’s difficult and the police do try to patrol it.