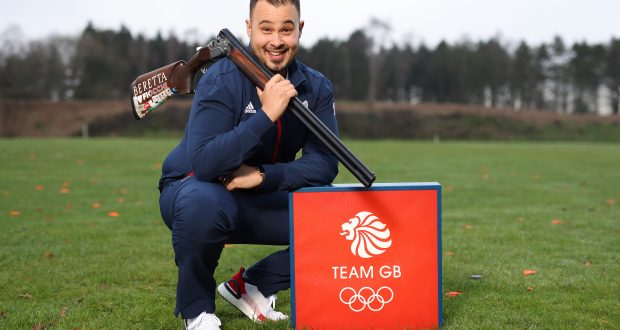 It has been a long wait – but finally the family of a South Holland Olympian can celebrate the Tokyo games.

Aaron Heading is taking his place in Team GB and will be realising his Olympic dream as a Trap shooter in the delayed games.

Unfortunately his Long Sutton family have been unable to join him because of the pandemic, but they will be celebrating the start of the games with a party on Friday.

“We are so excited,” said his wife Natasha.

At eight months pregnant, she said that there was no question of her attending the games.

“It’s a shame because it would have been the trip of a lifetime for all of us,” she said.

“This is such a proud and fabulous occasion for our family and the community to celebrate,” she said.

Natasha is hosting an Opening Ceremony Party at midday on Friday – complete with bouncy castle, face-painters, games, banners, balloons and flags from noon onwards at the Priory Clay Target Centre in Sutton Bridge, which the couple run.

“The party is open to all of our friends, family, customers and of course the local community with COVID social distancing measures in place,” she said.

Aaron, who is also a volunteer with Sutton Bridge coastguard, has a haul of 40 gold medals for both Team England and

Team GB along with around 30 sliver and 20 bronze – but his greatest achievement has been selection for the Olympic games.

“Basically the team is trapped in the village because of the pandemic. They are not allowed anywhere and a new physio had to be flown out this week when one of them tested positive,” said Natasha.

“They are being very strict and testing every day and he will have to self-isolate for ten days,” she added.

But she will be staying up to watch his first competition which will be on TV at around 1am on July 28.