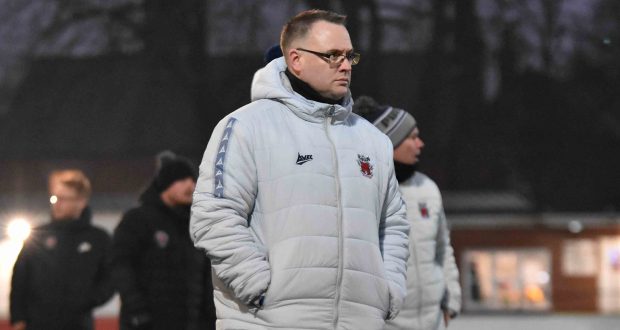 Lewis Thorogood is confident that his Pinchbeck United side will avoid relegation from the Uhlsport UCL Premier Division North after pulling off an incredible Easter double.

The Knights followed up their 3-1 victory at Newark on Saturday with a huge 2-1 win over Skegness Town on Monday, leaving their destiny in their own hands ahead of Saturday’s season finale at Leicester Nirvana (3pm).

Tuesday night’s huge clash between their relegation rivals Newark and Selston saw the latter win 3-1 to secure their step five status – and left Pinchbeck needing just a draw to stay up at Newark’s expense.

But Thorogood reckons the momentum is now with his Pinchbeck side and he wants to take all three points at Nirvana to complete a great escape that looked very unlikely just two weeks ago.

“To have our fate in our own hands after Easter is all that we wanted,” said the Knights chief. “We’ll now go to Leicester Nirvana on Saturday with the sole aim of winning.

“We have the belief and momentum now and have everything to play for.

“Leicester Nirvana perhaps won’t really have much to play for.

“We don’t want to be sat here next week discussing points-per-game or if we’re staying up on technicalities or not, we’re 100 per cent focused on getting one more win and doing it properly.”

Having lost three times against Skegness already this season, Monday’s Lincolnshire derby always looked an uphill task for them against opponents eyeing a fifth-placed finish.

But Pinchbeck, buoyed by their huge win at Newark, started superbly and went 2-0 up early on through Harry Peasgood and Spencer Weir-Daley.

They held that two-goal advantage up until the 60th-minute when Luke Rayner-Mistry netted for the visitors.

But he was one of three Skegness players to be disciplined in the final minute, with both Rayner-Mistry and ex-Knights defender Nick Jackson sent off and another player sin-binned following a fracas.

Pinchbeck survived a nervy finale that saw the visitors throw their keeper outfield to secure potentially the biggest win in the club’s recent history.

Thorogood added: “Skegness are a very good side and I know they came here wanting to get fifth place wrapped up in their final game.

“It was a strange game. In the second half they changed formation to 3-2-5 and starting pumping long balls at us, so we went 5-3-2.

“It felt like there was no midfielders in the game as both sides were just knocking it long.

“They scored with about 30 minutes left and you could just see our shoulders drop a bit.

“But, somehow, we held on. We were obviously helped when things – needlessly in my opinion – boiled over at the end and they were down to eight men for a period.

“Even then, we struggled nervously to clear our lines and they had a few free-kicks with the keeper up.

“But we got the job done and that was all the mattered.”