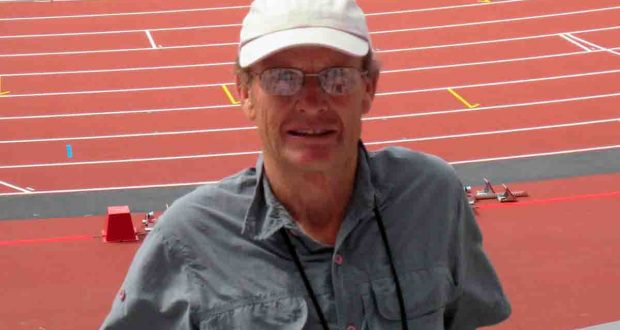 Training nights and competition days will not be the same at Peterborough and Nene Valley AC following the death of Roy Thickpenny after a long illness.

In a club statement a, Peterborough and Nene Valley AC spokesman said: “Roy was a true enthusiast having competed and coached locally for over 50 years.

“He also introduced many hundreds of youngsters to the sport, and served both Peterborough AC and Nene Valley Harriers well over the years. He was a good man and we will miss him.”

Born in Holbeach and educated at Spalding Grammar School, Thickpenny competed as a long jumper and played as a flying winger for Spalding Rugby Club.

He turned to coaching in the 1970s and specialised at the pole vault, becoming one of the few senior pole vaulting coaches in the country.

A former quantity surveyor, he packed in his career to work as a full -ime athletics coach, running many school holiday classes.

His versatility as a coach shone through more recently when he coached Nene Valley’s Max Everest to English Schools gold in the 2011 100m hurdles.

He had lived in Folksworth for many years, and at one stage bought some of his athletes to the village for training after constructing a long jump pit in a local field.

Thickpenny drove an estate car which most of the time resembled a mobile athletics store.

Many local athletes past and present queued up to pay tribute and ace all-rounder Sean Reidy said: “His passion for vaulting and athletics was unbelievable I’m generally one of the last people to leave the track on a training night, but that often meant I’d be walking out of the gate talking to Roy.

“He opened up pole vault to me with his expertise which allowed me to be a competitive combined eventer nationally and as a masters athlete over the last few years.

“He stayed neutral as coach during the rivalry between Peterborogh AC and Nene Valley Harriers yet was super competitive and always had the athlete’s best interest at heart come the day of the competition.

“His guidance and knowledge will be big loss to scene locally but his passion and expertise is a massive loss to sport as whole.

“The guy was amazing, he and I would talk about stuff after training and sometimes it would flip into full on arguments but they always ended well.

My last big one with him was about what motivated basketball player Michael Jordan. Roy didn’t think money was a factor!”

Distance runner Paul Parkin reflected: “In my Holbeach days he would stand next to the Late Tommy Clay trying to out shout each other with encouragement.

“My first memory of him was when I won my first cross country team prize, he told everyone in the future I would be winning individual prizes soon.

“The following season I won my first race and Roy was as happy with his prediction as I was.

“A great guy, he will be remembered by myself as a fantastic gentlemen. I loved my chats with him after training, and i’m saddened to know we cannot chat again.”

Former Nene Valley athlete Noel Keely added: “I first met Roy when I joined Nene Valley back in the early 90s. We enjoyed many chats and cups of tea down at the track. He always gave me encouragement and support during middle distance races in the southern league.

“When I joined Peterborough AC, Roy and his son Robert were members also and we had many good laughs and jokes on our many coach trips to British league meetings. He was a true gentleman and friend and he was loved by everyone who knew him.”

Nicky Bowling, whose sons compete for Peterborough Nene Valley, said “We were really sorry to hear of his death. He introduced and coached Angus for the pole vault over the last few years.

His technical understanding was brilliant but it was his dedication to his athletes that was so special. We will certainly miss him.”

His former Holbeach AC clubmate and South Holland sporting icon Geoff Capes reflected: “Roy had a great personality and was great with kids. A huge loss to our athletic family. Thoughts for the family and sorry for your loss.”

One of his recent athletes Devon Spencer said: “Roy had been my athletics coach on and off for over 12 years, so I have many fond memories I could share.

“Athletics was Roy’s passion and something which he couldn’t get enough of, probably telling from the hours he spent with his camp chair at the track!

“And when he wasn’t there he was calling or texting the group to see how we’d got on, and if things hadn’t gone to plan he’d be the first to tell us we could do better, spending the next few weeks helping us to make sure we did at the next comp.

“He was genuinely so thrilled and excited when the group did well, he’d make his way around the track and tell every soul who passed about our performances, to the point where we were having to drag him to the car park at the end of the day to get him home!”