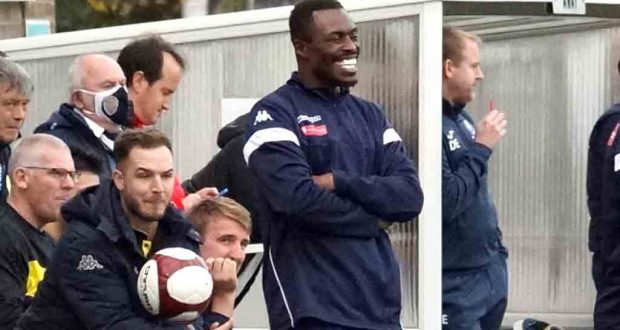 Boss Gaby Zakuani praised Nile Ranger’s impact as the striker marked his Spalding United debut with a goal in Saturday’s 3-3 draw at Belper Town on Saturday.

The former Newcastle United, Swindon Town and Blackpool striker joined Spalding on Thursday – making them his first club since his stint at Southend United was cut shot following a ten-week period in prison after pleading guilty to conspiracy to defraud back in 2017.

Zakuani, who was overseeing his first game as Tulips chief, also felt that his side showed great character to come from behind to grab a point at Belper, ending a run of six defeats on the spin in the process.

“I thought Nile was outstanding in both attack and defence,” said the Spalding supremo. “He’s so dominant in the air, which made him a great asset at both ends.

“Of course, Nile is a different character and has had his problems. But he was looking for a club and, after a lot of time spent trying to convince him, he’s decided to come here.

“His ability is obviously on a different level to this standard of football and he should be playing as high as he can.

“But we’ve given him a platform to start playing again and he’s off to a great start.

“If you look at the table, Belper are doing much better than us at the moment.

“So to go there and get a draw is a great result. Coming from behind three times shows great character, too.

“My aim will be to win our home games and get what we can away, so with that in mind I have to be pleased.”