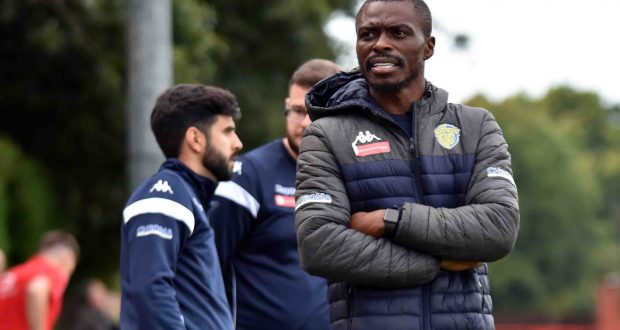 Boss Gaby Zakuani was left impressed as Spalding United picked up an eye-catching 2-1 win at Corby Town on Saturday.

Goals from Chris Assombalonga (12) and Stefan Broccoli (49) secured the Tulips all three points in the Pitching In NPL Midlands Division at Steel Park.

Stephen Diggin pulled one back on 66 minutes for the hosts, but Spalding held firm to pick up their second league win of the season.

For Zakuani, the victory also banishes the memory of a 3-1 defeat at Yaxley in their previous away game.

The former Peterborough United defender said: “Massive three points away at Corby. We had to dig in and grind out the win.

“My team have shown they have both sides of the game in the locker. Once again thank you for the fantastic support.”

Spalding started the better of the two sides and went close before Assombalonga opened the scoring.

A long throw into the box was headed onto the bar, with the striker on hand to finish off the rebound 12 minutes in.

At the other end, Michael Duggan was forced into a typical save to turn Jordan O’Brien’s effort over the bar.

The Spalding number one was beaten moments later, but Jake Holt’s drive came back off the bar as the Tulips clung onto their lead.

After a few words from Zakuani at the break, Spalding came out of the traps quickly in the second half and went 2-0 up when Assombalonga raced through and squared for Broccoli, who fired home.

Corby refused to throw in the towell, though, and deservedly pulled one back when Diggin smashed home.

The ball was well won by Elliot Sandy and dropped for Diggin, who saw his powerful shot deflect in the net.

However, Spalding held firm for the final 20 minutes or so as they hung on to collect a valuable victory against a Corby side that many would be expecting to be up there challenging at the top reaches of the table come the end of the season.

It’s also a first away win in the league under Zakuani.