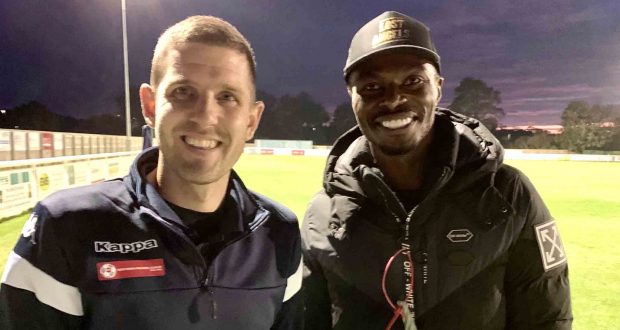 IN CHARGE: Neal Spafford and Gabriel Zakuani. Photo by @SpaldingUnited on Twitter

Former Peterborough United legend Gabriel Zakuani was in the Spalding United dugout as they suffered a 3-1 defeat at Cleethorpes Town on Tuesday night.

It’s now four Pitching In NPL South East Division defeats on the spin for the Tulips, who were shot down by goals from Scott Vernon (26), Josh Venney (48) and Ross Hannah (82) at the Linden Club.

Cameron Johnson pulled one back for Spalding five minutes from time, but the big story of the night was Zakuani’s presence.

The former DR Congo international defender joined caretaker manager Neal Spafford in the dugout for the Lincolnshire derby in the wake of Lewis Thorogood’s resignation as boss on Monday.

Speaking before the game, the ex-pro said: “I’ve been helping them (Spalding) since a friend of mine, Andrew Killingsworth took over the club.

“I’ve just been helping him on how things are run etc. I’ve not done any coaching yet, just watched videos of last few games and had input about off the pitch affairs.”

Tulips’ CEO Leigh Porter added: “I’m really grateful to Neal and Gaby for coming in and helping us this week, it’s hugely appreciated.

“While the search for a new manager continues, they are playing a part in the overall process.”

But it was Cleethorpes who grabbed the opener when Vernon met Harry Middleton’s delivery and headed home midway through the first half.

The Tulips finished the half well, but soon found themselves 2-0 down early in the second period when Venney coolly finished low into the net.

Michael Duggan pulled off a fine say to keep out Middleton’s free-kick as the hosts looked for a third.

There was nothing he could do about Hannah’s strike eight minutes from time, though, as he tapped home following fine wing play from Caine Winfarrah.

There was time for a nice Johnson finish after he twisted and turned on the egde of the box before netting the Tulips’ solitary consolation.

Next up for Spalding is a home date with Bedford Town in the FA Trophy on Saturday (3pm).

There will be another former Peterborough United hero on the field in the shape of Craig Mackail-Smith, who now plays for Saturday’s opponents.