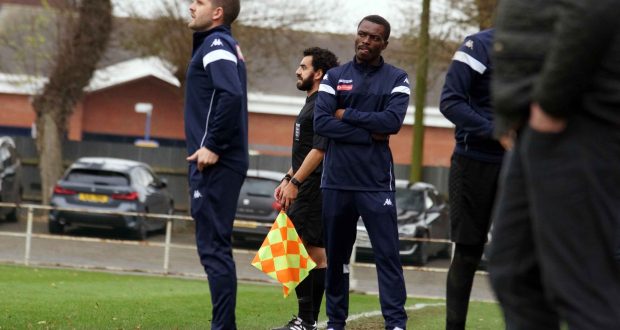 Gaby Zakuani admits that the 28-day suspension of the non-elite football season couldn’t have come at a worse time for Spalding United.

The new Tulips chief, who led his side to a 3-3 draw at Belper Town in his first game as permanent manager on Saturday, feels he was just beginning to stamp his authority on the squad.

Having signed a host of new players last week – including ex-Newcastle United striker Nile Ranger – the former Peterborough United skipper had hoped to get his squad on the training pitch.

Instead, he’s giving them a fitness programme to follow over the coming weeks and expects them to return to Pitching In NPL South East Division action in tip-top shape.

“I was obviously very busy getting players in last week,” said the former DR Congo international. “I’ve been trying to drill my mentality and style into them all.

“For me, the lockdown comes at a really disappointing time. I’ve been trying to get them to play the way I want and to transfer my mentality to the squad, which I felt came through a bit on Saturday.

“It’s a challenge for me. I’ve got a fitness coach to put them through their paces before lockdown and then a programme for the players to follow – I’ll be expecting the lads to keep themselves fit.”

Zakuani, who boasts close to 500 professional appearances in the English Football League, is hoping that his winning mentality will rub off on his players when they return from lockdown.

He wants his squad to aim for the very best they can achieve this season and beyond, while not looking over their shoulder at the drop zone.

“I’ve always been a winner,” added the former defender, who was dubbed ‘The Wall’ during his career. “I want that to be the way my players think, too.

“It’s very early in the season and the play-offs are certainly not out of reach. Let’s see what we can do. Nothing is out of the equation at the moment, but things may change by January – then you re-assess.

“From my point of view always look up the table, not over your shoulder.”

Spalding’s next scheduled game is now a trip to Sheffield FC on December 5.