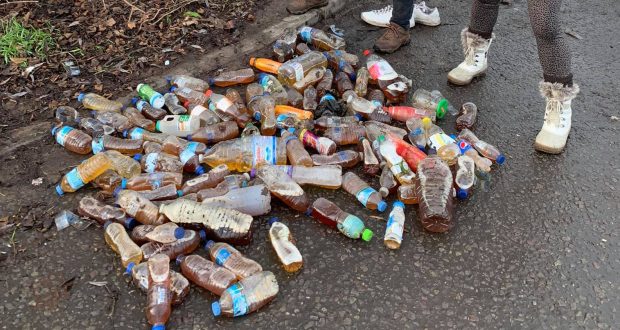 Mother and daughter Cheryl Ingleby and Sadie Sharman with the 102 bottles of urine they found.

The discovery of more than 100 bottles of urine and bags of excrement by a group of Wombles has led to calls for better toilet facilities for lorry drivers around Wardentree Lane.

Mother and daughter Cheryl Ingleby and Sadie Sharman said they were left “shocked” after litter picking around Wardentree Park having been among the hundreds inspired by the new Wombles of Spalding Common initiative looking to clean up the town.

They found so much rubbish that Spalding Rugby Club, who Cheryl’s son Harry plays for, were called in to help out.

But it was the 102 bottles of urine they collected and “many, many” bags of excrement found thrown in hedges that has led to the call for better toilet facilities in the area.

“It’s clearly something in the town that needs to be done,” Cheryl said. “It was a real shock finding them.

“I think it’s 80 per cent of the UK’s food that comes through the area and in Spalding and Pinchbeck we don’t have any facilities for lorry drivers.

“Yes they should take their containers of urine and faeces home with them, but we’re also not providing them with any facilities in the area.

“A small plastic bin has been put down there but we filled 34 bags of rubbish.

“We left four bin bags there for people to fill.

“The councils spend money on things that aren’t needed so much like bike racks, but a couple of portable toilets would help.”

Ward councillor Elizabeth Sneath said she was “horrified” to hear of the finds.

“Facilities for lorry drivers are something we’ve spoken about before but nothing has happened.

“I do know that some lorry drivers go into Morrison’s, which is OK, but they’re not open 24/7.

“We did arrange to put the bin down there and that does get emptied frequently but obviously something needs to be done.

“It can’t just be the council though. It’s also the responsibility of the big food companies for whom the lorry drivers are working and those who own the land.

“We’ll need money and we’ll need land but it’s a project we can look to take forward after COVID-19.”

Cheryl and her family were only some of a number of Wombles of Spalding Common back out this weekend collecting litter.

The Facebook group set up on January 4 now has more than 1,100 members.

“I think people have been really inspired by those that started it up,” Cheryl said when asked why she had got involved. “I like the fresh air and I like the idea it’s giving something back to the area.”

Coun Sneath added: “What a marvellous job the Wombles are doing.

“At a time when the district council’s street cleaning teams are stretched due to COVID pressures and illness the Wombles are a breath of fresh air during these dark January days.

“Having done many litter picks I know it’s not all fun and can be very dirty and unpleasant but they all look very smiley and enthusiastic.

“As one of them said on Facebook “this is the new going out”.

“I’m sure a big thank you goes from everybody to the Wombles.” 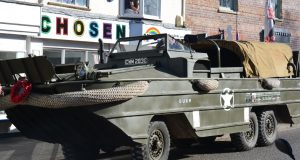