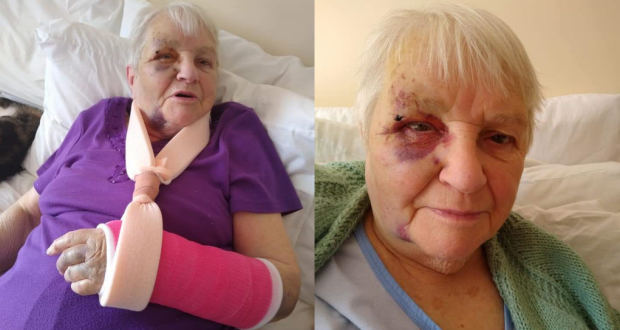 Witness appeal after pensioner is injured

An 83-year-old says she’s been left unable to knit the children’s clothes she normally provides for charities after being hit by a car close to her home.

Jean Cox says she was hit by a black Jaguar car while crossing St Andrew’s Road at around 3.40pm on Wednesday, September 25.

She was making the short journey from Tavistock Road to the off licence at Little London to collect The Voice when the incident happened.

Jean suffered a blow to her head and eye and is continuing to have problems with her vision in her right eye.

The widow, who has beaten bladder cancer in the past, says she’s also been left housebound after breaking her left wrist and suffering cuts and bruises.

“I left my house at around 3.40pm as that’s what time The Voice is delivered to the shop,” Jean said. “It’s normally only straight down the road but I noticed that the traffic was nose to nose at a standstill.

“I was crossing St Andrew’s Road when I saw this car coming round the corner and turning in from Hawthorn Bank.

“It seemed to be going a bit quick to me.

“It hit me in the side and bounced me up in the air.

“I just remember how much it hurt and I was pouring with blood.

“The person said they didn’t see me, but I was pretty much in the middle of the road.”

Jean says the driver has said he did not hit her with the car and that the police have told her there’s no evidence on the driver’s car that the collision occurred.

She thanks the driver for stopping and his wife for driving her home.

But Jean would like to hear from any witnesses, particularly drivers who were queuing along Hawthorn Bank, one of whom stopped to help her.

She came forward with her story as a police appeal published last week stated the event took place at 5.30pm rather than the correct time of 3.40pm.

But that was the time it was reported to the police by ambulance staff that attended her at that time as Jean had thought others had already reported the incident.

“I would really like to hear from witnesses,” said Jean who has lived on her own for the last 17 years after the death of husband Ron, whom she was married to for 45 years.

“I have no interest in suing anyone or anything like that, but I would like to claim on my insurance as the incident has left me virtually housebound.

“I’m left handed and even now with the cast off, I still can’t feel my thumb and index finger in my left hand.

“I can’t even open a door at the moment and I’ve had to end my car tax and insurance because there’s no point paying that when I can’t drive.

“I’d taken up a keep-fit class again the week before it happened and I’m building up my fitness too.

“I’m also particularly annoyed I’ve not been able to do any knitting or embroidery.

“I go to several craft groups and with one we always knit items of clothing to send off to children in poorer countries at this time of year, but I just can’t do it.

“Luckily, although most of my family live miles away, one of my daughters lives close by to help me around the house, otherwise I’d be really lost.”

A spokesman for Lincolnshire Police, said: “A 61-year-old man has been voluntarily interviewed.”

Anyone with any information on the incident is asked to contact the police by calling 101, emailing force.control@lincs.pnn.police.uk quoting the reference 349 of September 25.