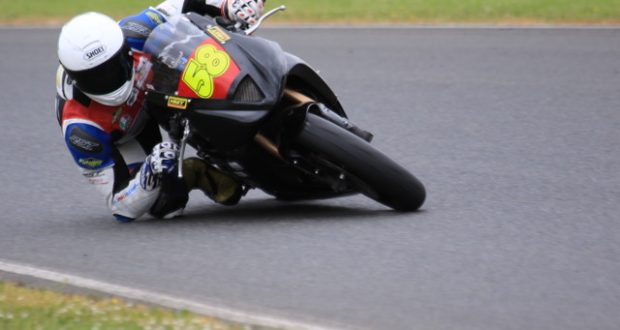 Warren’s on the charge for title honours

Warren is up to third in the championship after the latest round at Mallory Park and is now hoping to maintain his momentum in the quest for honours.

He said: “I feel we have a good chance to keep this momentum going and work our way up to the top.”

Warren managed to gain fourth place on the grid after a 15 minute qualifying session for the opening race.

He made a good start to the race and, was holding third spot, until the ninth lap when he ran wide and dropped a place to eventually finish fourth.

The same happened in race two as Warren lost third place in the final lap but his times from those two races secured pole position for the following day’s races.

Damp conditions worsened in the opening race on Sunday and it was stopped for a 15 minute delay while the racers changed to wet tyres.

A bad start saw Warren slip to seventh spot but, as the laps progressed, he began to adjust to the conditions and worked his way through the field to finish in third.

The final race of the meeting saw Warren make a good start and hold first place for nine-and-a-half laps of the ten lap race.

However, he ran wide under pressure and dropped to finish second on the penultimate corner.

Warren is next in action on July 16 at Cadwell Park in a new format called Moto Time Attack in addition to his usual Thundersport GB championship.

Warren would like to thank his sponsors Wheels Motorcycles, South Lincs Leisure caravan sales, Bemoto, Pure Triumph Woburn and Sportsbikeshop for their support. Any other companies wishing to offer sponsorship should contact Liam on 07894 715118.