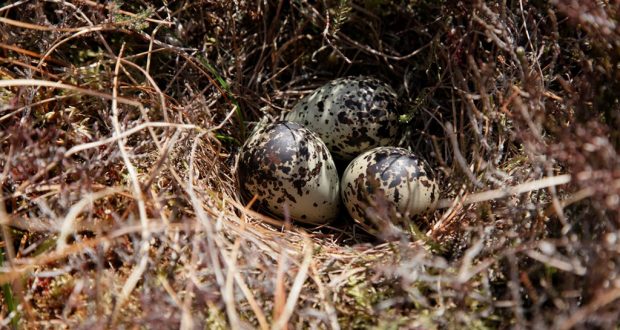 Voice from the Wildlife – Some egg-cellent facts

Birds are completely unlike mammals, in that they do not produce live young.

They save time by avoiding pregnancy and instead lay eggs.

The young bird can develop inside the protective casing, whilst the parent goes off and feeds. There is a downside of course.

Eggs can be vulnerable when left alone, either to the elements or to predators.

Many birds chose to sit on their eggs, to keep them safe and warm. Other eggs have incredible camouflage.

The seabird called the guillemot faces an additional challenge.

It nests on small ledges on cliffs, from which an egg could easily be knocked onto the rocks below.

So its eggs are a very pointed shape, meaning they roll around in a tight circle and hence are unlikely to roll off the edge.

The smallest eggs in the world are laid by the bee hummingbird. This tiny little bird lives on the island of Cuba and is only 5cm long. Its egg is slightly smaller than a pea.

Compare this to the largest eggs in the world, which are laid by ostriches. Their eggs are 15cm long and can weigh 1.5kg.

That is 20 times the weight of a standard hen’s egg. Imagine the size of the soldiers you’d need to dip on one of those!

Oddly though, big though they are, ostrich eggs are actually the smallest egg in comparison to the size of the bird.

The largest egg in that regard belongs to the kiwi of New Zealand.

It lays an egg which is a quarter of its own body weight. To put that in human terms, imagine giving birth to a baby the size of a four year old. Ouch!

It used to be a common pastime for people to collect bird’s eggs. This could cause real problems for rare birds, which would be driven to extinction. Despite egg collecting now being illegal, there are still some egg collectors out there.

So if you spot anyone behaving suspiciously near a bird’s nest, please do contact your local police.

Sir John Hayes MP – Rise and shine as one nation