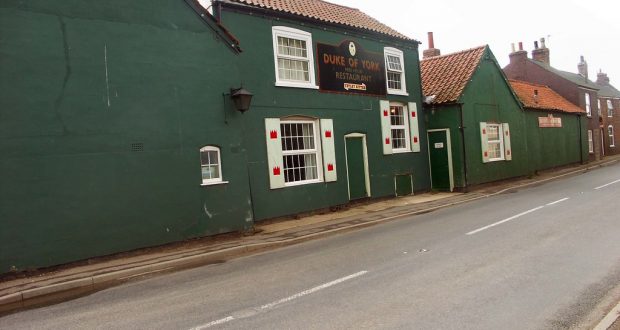 Village pub could be redeveloped

A South Holland pub hit by the ‘disastrous impact’ of COVID-19 is not opening its doors again.

Plans have been submitted to demolish the Duke of York at Gosberton Risegate and build new homes on the site.
The pub has been occupied since 1881, according to documents submitted to South Holland District Council, but it is no longer viable.
“The current owner/licensee has resided in the premises since March 1995 during which time the public house enjoyed a moderate turnover for a number of years until customers’ social habits changed. Downturn in trade impacted significantly on revenue and the business as a whole. COVID 19 had a disastrous impact on what was already a struggling business,” says the design and access statement.
“Due to insufficient income the buildings have become rundown and unmaintained, professional advice is that the repair costs to the building are unviable in the current economic climate,” it adds.
The proposal would see the existing buildings demolished entirely to create a terrace of dwellings fronting onto Risegate Road.
The application says the style of the planned homes would be in keeping with the former links with the old railway the pub once had and would blend with the landscape.
There would be a total of eight homes, four in the terrace and four dwellings on land at the rear of ‘modest architectural style.’
The application is currently outline and further details would be decided under reserved matters should the proposal be approved.
The site allows enough room for off-road parking for all the new homes along with a safe turning area.
The adjacent public right of way and its sheltering tree line will remain once the site is redeveloped.