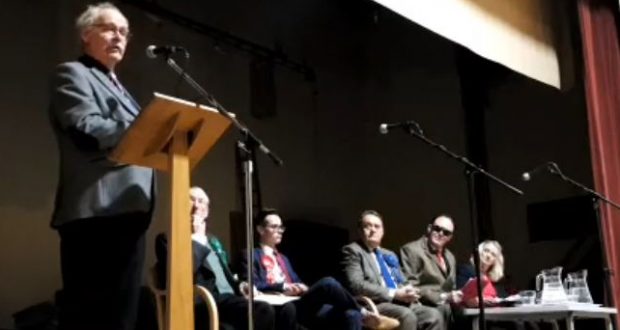 Friday night’s general election hustings were a spirited affair, with each candidate fighting for votes to earn their place in Parliament and members of the audience disrupting the event.

Hustings organiser John Bennett said there were around 75 people at The Vista for the event, which The Voice streamed live on Facebook, where it is still available to be viewed in full.

On the night, each candidate spoke for seven minutes with their opening statements before fielding questions that had been pre-submitted.

In attendance was Sir John Hayes, who has held the seat since 1997 and is again standing defending a majority of 24,897 from the previous 2017 election, Mark Popple of the Labour Party, Davina Kirby of the Liberal Democrats, Martin Blake of the Green Party, and Independent candidate, Rick Stringer.

Questions put to the candidates spanned a wide range of subjects, including work eligibility means tests of the Department of Work and
Pensions, Universal Credit, naval and maritime security, the A16 Radar Junction and issues concerning the environment.

Each candidate was then given two minutes for their closing statements, during which Sir John overran and refused to yield, despite jeers from the audience.

A wound-up Craig Jackson, Campaign Manager for the Brexit Party in South Holland and The Deepings, disrupted the event a number of times, complaining that Brexit wasn’t being discussed by the candidates.

Members of the audience had to move from their seats to try to calm him down and allow the event continue.