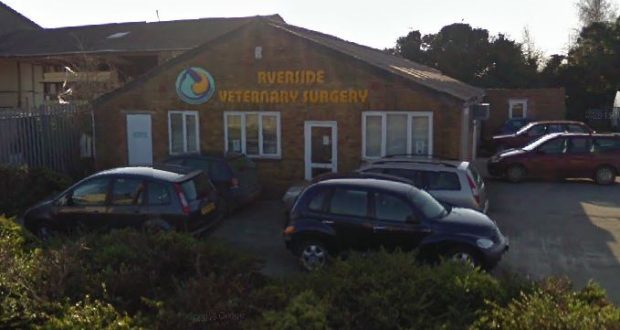 A Spalding veterinary surgery has faced investigation after a dog died in its care just hours after surgery.

Two members of staff at Riverside Veterinary Practice at Cradge Bank have been investigated by the Royal College of Veterinary Surgeons (RCVS) after the owners of Kiwi, an 11-year-old German Shepherd / wolfhound cross, complained after they were led to believe the surgery offered 24-hour care.

Kiwi’s owners, Mr and Mrs O’Callaghan, said they registered Kiwi with Riverside after reading on the website “24 hour care is provided at our practice, with our vets”.

Under scrutiny in the report into the incident that occurred in 2017 was owner and practice principle Julia Creese, and Elizabeth Law, one of four veterinary surgeons at the practice at the time.

Julia Creese was cleared of all three charges, while Ms Law has been reprimanded by the RCVS.

On November 7, 2017, the couple took Kiwi to the vet with “bloat” and arranged to meet the vet at the surgery at 8.30pm, arriving 20 minutes before any staff members.

The O’Callaghans left Kiwi at the practice and were telephoned at 9.35pm with the news that x-rays revealed surgery would be required immediately.

After Ms Law and a veterinary trainee nurse had completed the surgery, they telephoned the O’Callaghans at 12.10am to tell them “Kiwi was in recovery and that the surgery had gone quite well,” the report states.

The couple were asked to call the surgery at 9am to discuss when Kiwi could go home.

At 12.30am a final check was made on Kiwi and he was then “left alone overnight, during which time no visits or checks were made to assess and/or monitor his condition”.

Kiwi was found dead in his kennel at 7.45am when the trainee practice nurse entered the surgery.

The report states: “The committee considers that no reasonably competent veterinary surgeon in general practice would have considered leaving a dog, which had had GDV (gastric dilatation volvulus) and undergone extensive abdominal surgery, and was not fully recovered from the anaesthesia, alone and unmonitored for about seven hours overnight.

“The second respondent’s [Ms Law’s] conduct in this regard was completely unacceptable.

“In the judgement of the committee, this conduct fell far short of that which is to be expected of a reasonably competent veterinary surgeon in general practice.”

In its report, the RCVS had no concerns about the safety of animals in the care of Ms Law at the surgery in future:

“The committee does not consider it necessary to issue a warning to the respondent about her future conduct, on the basis that the committee has concluded that there is no risk of repetition.”