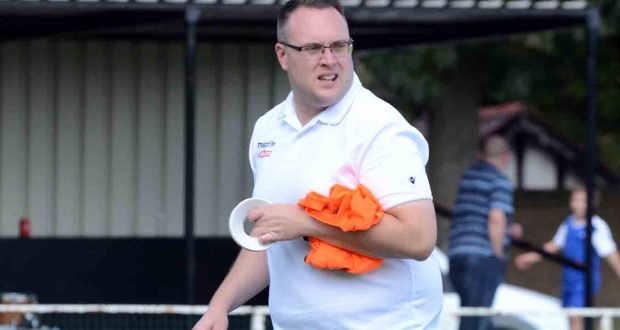 It’s two in and two out for Spalding United as the plans for the 20-21 season continue to develop as much as they can.

Manager Lewis Thorogood is hopeful that the club will be able to begin pre-season next month ahead of the 20-21 Evo-Stik Division One South East season.

The Tulips have brought in two players from Lincoln United to replace two outgoings.

Midfielder Jamie Goddard and left back Ryan Flitton are making the move to the Sir Halley Stewart when football returns.

The latter is a former Lincoln City academy player brough in to replace James Hugo who has left the club for fellow Division South East outfit Frickley Athletic alongside Kegan Everington.

Goddard is a former Grimsby Town midfielder who impressed Thorogood earlier in the season.

“It’s really great to get these two here,” said the Tulips boss. “They’re hard working lads with a great attitude and that’s what I’m finding about the players in the squad we’re putting together.

“With James and Kegan moving on to Frickley we needed to fill positions.

“Both of those are great lads who move on with my best wishes and the door is always open for them to return.

“We identified the areas we needed to fill and we brought both Jamie and Ryan in.

“Jamie was the stand-out performer when we played Lincoln United on New Year’s Day.

“He’s a strong and combative midfielder who’s got a lot of talent and good pedigree having come through with Grimsby Town.

“Ryan is a natural left back who is fit, athletic and strong in the challenge while he also likes to push forward.

“He’s going to be a James Hugo in the making for us.

“With those coming in and we’ve already brought in Bradley Fortnam-Tomlinson as a centre forward, who is a great player, it’s all coming together.”

Thorogood says that speaking to his squad the Tulips are desperate to get back playing.

While the top two tiers of football may be back playing, it’s still unclear when preparations for the new season can start.

All sports clubs can train without contact in groups of six or less. The Tulips always planned to be back from pre-season in early July, and the club hopes that will still be the plan when the next advice is issued by the government.

“Like many football clubs, the lads haven’t even kicked a ball for a whole three months,” Thorogood continued. “They are itching to get back.

“A lot of clubs have started back but I feel that’s a tad premature.

“We’d always planned to come back early in July and we’re still hoping that’s the case.

“We’ve got to be sensible about it.

“The one good thing is that long term injury problems and niggles have all cleared, so we’ll have a clean bill of health.

“We’ll see what we can do with pre-season friendlies which we’ll need. Maybe two or three of them will behind closed doors.

“We’re going to plan for it the best we can.

“There’s lots of work going on behind the scenes.

“I’m never going to moan about the off-season again.

“Before it was eight weeks and I was moaning about not having football for so long.

“Now it’s about 13 weeks and still nothing.”

Spalding United has announced a price freeze on its season tickets for the 20-21 season which are now on sale.

The tickets are available for all home matches and the proposed Free Press/Guardian tournament.

“I think there could be a benefit for all clubs.

“I don’t think there will be as much of an appetite for sitting in big crowds and people may be more tempted by clubs such as ourselves where, let’s be honest, you can spread out a bit more.

“I’m doing the Facebook Live football chats on the club’s page to keep supporters in the loop on what’s going on.

“We want as many as possible behind us.”

Tickets are available from treasurer@spaldingunited.net or call Jennifer on 07917 532796.