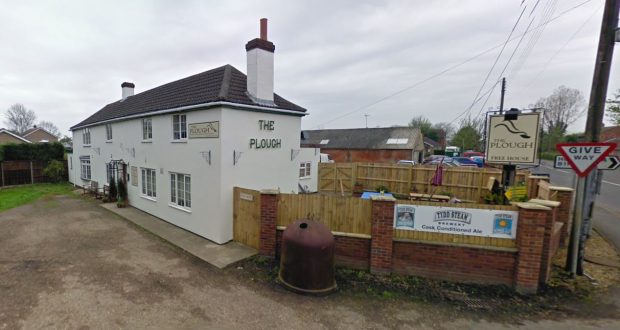 The Holbeach area could lose two more pubs after applications were submitted to turn them into homes.

The owners of the nearly 200-year-old Plough Inn on Jekils Bank, Holbeach St Johns, and The Bull’s Neck in Penny Hill have both applied for change of use planning permissions.

The owner of The Plough, Ian Osborn, only took over the lease in July and in planning documents submitted as part of the application is threatening to ‘board the pub up’ if planning permission isn’t granted.

The submission with the application states: “I have spent several thousand pounds in the hope that we could have opened.

“The Plough currently has planning to turn part of it into holiday lets, which I can only presume was due to the previous owners identifying the pub was failing as a business.

“Obviously during this pandemic to try to convert to holidays lets would not generate any extra income as they to have been forced to close, and also because of the costs involved in moving the toilets etc, it is not reasonably practicable to convert.

“The building is nearly 200 years old and despite my best efforts to maintain and update the interior it now, unfortunately, requires a new roof on the original part of the building and re-rendering outside.

“I’m asking for a change of use to a private dwelling, if granted I would look to sell The Plough as I do not have the finances to develop it myself, should the change of use be denied then The Plough would end up being boarded up.

“I have spoken to a couple of business brokers who deal with selling public houses but they have all said the same thing, no one is buying pubs at the moment because they cannot open.

“I am not entitled to any help from the government financially at all and cannot reasonably afford to maintain the premises.

“This is a very unfortunate situation and certainly one that I didn’t wish for.”

Information submitted as part of the application to turn The Bull’s Neck into a single private dwelling offered similar reason.

The pub’s owner Neil Spires is now classed as disabled and his wife has had a life-changing illness, representation on behalf of Mr Spires from Andrew Oglesby says: “The current owners, who had previously been publicans elsewhere, purchased the site in 2016 and completed a full refurbishment prior to reopening in April 2017.

“Since reopening however, the pub has failed to attract sufficient custom and hence income to survive as a viable business.

“The owners have tried to attract business locally, including appearing in an article concerning the pub’s future back in May 2018, but there is simply insufficient trade to support this facility.

“The market town of Holbeach is just over a kilometre to the south and this contains several public houses which are perhaps better placed to attract custom.”