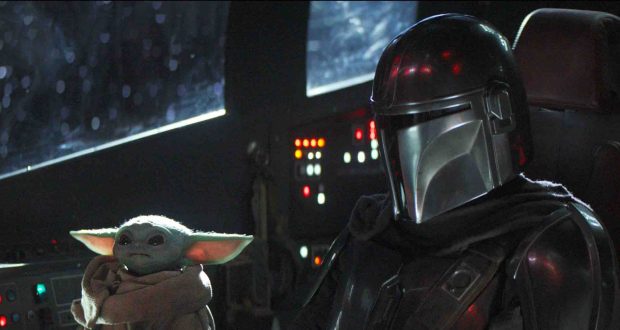 UNLIKELY TEAM: The Mandalorian and ‘Baby Yoda’ are both on good form in the first three episodes of the new Star Wars show.

For many of you, The Mandalorian will be the reason you’ve either signed up for new streaming service Disney+ or are tempted by the idea.

The Disney+ original series, created by Jon Favreau, is set after the fall of the Empire and before the emergence of the First Order in the Star Wars timeline (that’s roughly between Return of The Jedi and Force Awakens).

Starring Pedro Pascal (Game Of Thrones) as lone bounty hunter The Mandalorian, there are nine episodes to enjoy (albeit only three available to stream at the time of writing).

So, is it worth activating your seven-day free trial for? In this Star Wars fan’s humble opinion, absolutely.

It’s fair to say that episode one gets us off to a largely impressive start, giving the audience an immediate Star Wars vibe with scenes reminiscent of Episode IV’s legendary cantina.

Although The Mandalorian never reveals his face, we get a glimpse of his character – given that he ruthlessly freezes his targets in the carbonite used to capture Han Solo in Episode V.

Without saying too much, his line of work eventually leads him towards the already-popular Baby Yoda (the hype is real) in episode two.

The action really ramps up in the second and third episodes, including some trademark blaster action and it delves deep into The Mandalorian’s ways and shows us more of his complex character.

Drip-feeding us UK subscribers episodes one week at a time is a little harsh given that it has already finished in America, but it keeps you hungry for each new chapter on Friday.