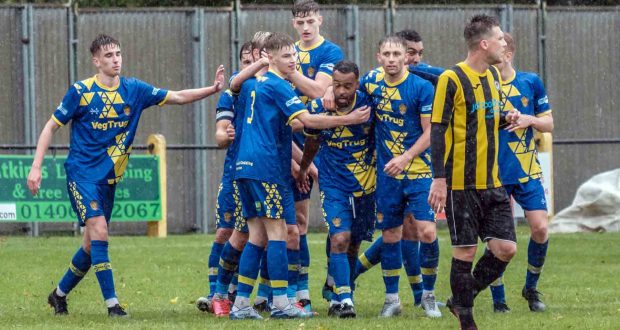 Spalding United’s proposed friendly with Peterborough United has been pushed back to August 11.

The match at the Sir Halley Stewart was due to take place last night (Wednesday), but Posh were instead in action playing a re-arranged game against Oxford United.

Tickets for the original fixture will be valid for the rearranged fixture.

In a statement Spalding United said: “We hope as many of you with tickets do still attend the new date as a game of this stature and the revenue it generates is a lifeline to a club like ours in the current climate, your support is hugely appreciated and valued.

The Tulips have been in fine form in recent pre-season friendlies beating Deeping Rangers 3-0 on Saturday and Harrowby 6-3 on Tuesday night.

Spalding had to work hard for the win at Deeping with Josh Brownhill giving them the lead on 69 minutes.
Brownhill struck again late on before Spencer Weir-Daley rounded things off in injury time.

The Montserrat international is finding his scoring boots for the Tulips and he hit a hat-trick at Harrowby on Tuesday night.

They’re due to play Nettleham on Friday night in another friendly ahead of the season opener against Loughborough Dynamo on Saturday, August 14.