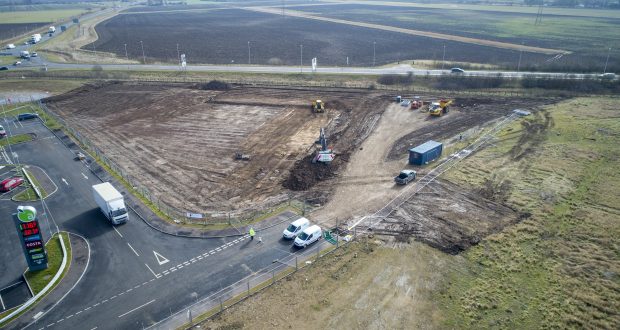 Work is underway on the new Marston’s site in Spalding.

Work on a new pub and restaurant for Spalding is under way.

The Tulip Queen is due to open its doors to customers later this year.

The Marston’s operation is being constructed on The Lincs Gateway development on the edge of the town and is a pub with a 38-bedroom lodge.

Work has already begun and adverts were placed this week for a new general manager.

It will be run using the company’s Milestone Carvery format and the company expects there to be more than 2,000 covers a week.

A Marston’s spokesman said: “Construction on the new pub and 38-bedroom lodge started on Monday, March 5 with an expected six-month construction period. We are excited to begin work here and look forward to opening to the public in late September.”

Marston’s is also expecting there to be a 30-strong staff involved in running the new venue.

The company is the latest name to be revealed for the multi-million development on the A16.

Holbeach-based developer Ashley King Developments is behind the new park, which will be a mix of retail and commercial outlets. It already has a number of companies trading, including Greggs, Costa and Applegreen.