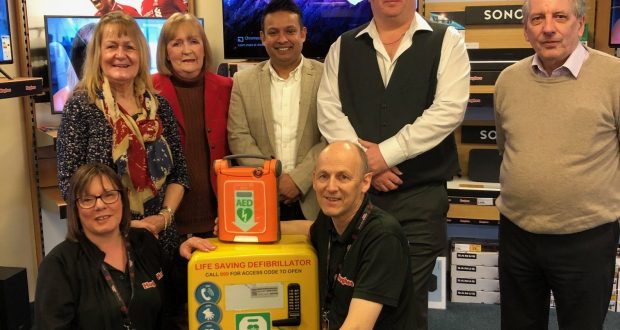 Town gets a new defibrillator

Spalding has a new defibrillator in the town centre.

The emergency medical device was put on the wall of Hughes Electrical at Sheep Market on Friday, March 20.

Jan wrote about the event in her weekly Tulip Talk column.After helping raise money for a defibrillator to be positioned on Nationwide’s wall in town, I felt we needed another one in another area of the town.

Approaching Graham Boor, from Hughes Electrical, he said: “Hughes would be delighted to be involved and associated with this project for the town and community.

“There is no easily accessible equipment of this kind close to the Sheep Market,.

“As part of our community and social awareness Hughes are honoured to be involved with the scheme,.

“When up and running this will provide a much needed piece of life saving equipment readily available for this part of the town.”

I would like to say thank you to Couns Gary Taylor, Anthony Casson, Elizabeth Sneath, Rob Gibson, Mansur Hassan and Harry Drury for contributing towards this much needed piece of equipment. Also to Graham for getting involved so quickly and making sure Hughes Electrical came on board.

Unfortunately, Harry and Gary were unable to attend for the picture but said: “The decision to financially support a defibrillator being situated at Hughes Electrical was one which did not require a second thought.

“This equipment is the difference between life and death for members of the community who require it. The placement of such equipment geographically in the town centre is vital as access to it within a matter of seconds in many cases, massively increases the chance of survival.

“Thank you so much to Jan and those who have facilitated this, at some point, you have probably quite literally saved a life or lives.”

The other two defibrillators are located in strategic locations, one at the South Holland Centre and the other outside Nationwide Building Society.

I would like say thank you to LIVES for your help and support on getting this piece of equipment delivered so quickly. I’m sure it will be valuable to this area of the town for our community.