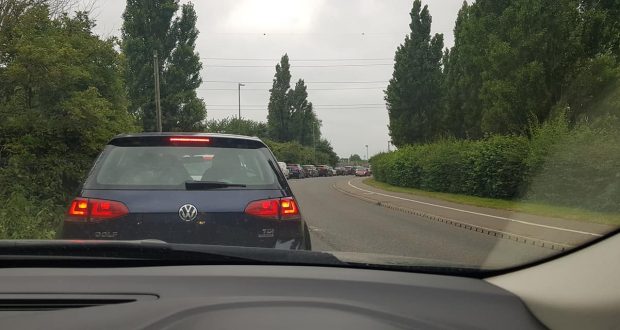 Alex Pre’s picture of the queues.

Queues of more than an hour were reported at Spalding’s Waste Recycling Centre over the weekend after Lincolnshire County Council added more booking slots to its system.

Drivers were left with long waits to get into the West Marsh Road site, despite having booked slots as part of the controversial system due to end in September.

Alex Pre was among those attempting to get into the site on Saturday.

“I had an appointment at 11:45am,” he said. “The queue was so big it stretched towards the roundabout and over the Anglian Water main gate.

“Nobody was helping in there, no matter how heavy the rubbish is or how long you’re in there.”

Lincolnshire County Council which oversees the tip has previously said it would close its doors if traffic queued up and on to the A16.

However, the authority says that didn’t happen at the weekend.

Simon Bell from waste services at Lincolnshire County Council, said: “Over the past few days, we’ve increased the number of slots available at the HWRC in Spalding. Unfortunately, this has caused queues onto West Marsh Road.

“We’re monitoring the issue and, if necessary, we will review the number of people accessing the site.”