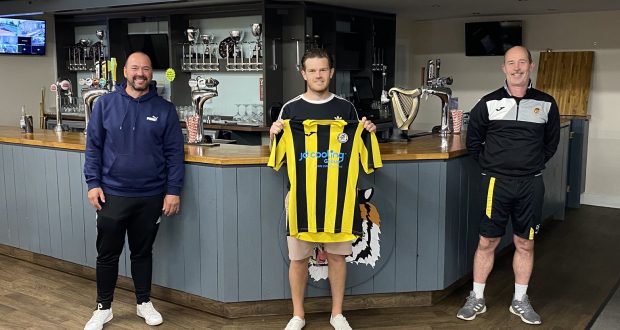 The off-field preparations for next season are coming together at Holbeach United with a new signing identified and four of the club’s top talents signed on for the new campaign.

Captain Spencer Tinkler, vice captain Jonno Fairweather, keeper Ricky Drury and striker Jonny Lockie have all committed to return to the Tigers for the 20/21 season.

The Tigers do look set to lose Will Bird though who has told the club he’s moving on.

But they have agreed to bring in another young striker in former Pinchbeck United 18-year-old striker Reif Clarke.

Phil Barnes is the new manager at Carter’s Park.

After taking over from the previous incumbent Danny Hussey, Barnes had already expressed his desire to keep the current squad together.

And he’s already managed to sign up the spine of that team.

“We’re pretty pleased with how it’s going so far,” Barnes said of the pre-season preparations. “We had the conversations with the players in March when we took over from Danny Hussey and they said they were going to come back but you never quite know until they’ve signed on.

“We’re really pleased to get these four tied down, especially the captain and vice captain, a really good forward in Jonny and top goalkeeper in Ricky.

“We’re hoping to meet up with a few more of last year’s squad this Saturday and hopefully we’ll be able to sign on a few more.”

On Bird’s departure, Barnes said: “I think it’s a case that in the last couple of years he’s not had the game time he wanted.

“We offered him a fair chance at next season and a clean slate, but he wants a new challenge.

“We’ve wished him the best and said to him that if it doesn’t work out then he can give us a ring and he’ll always be welcome back.

“As well as signing on last year’s players we’ve been talking to two or three players to bring in.

“One of those who’s said he wants to sign is Reif Clarke who is a very good young forward. He’s a former Peterborough United youth player whose also played for Pinchbeck.

“He’s been playing with St Neots, mostly in the under 18s but has also been featuring for the first team in the Southern League.

In terms of on the pitch and pre-season training, Holbeach United are playing the waiting game.

Phil continued: “We’re waiting to see what the league says about when we’re going to re-start before starting training.

“I think you can start training too early and you don’t want to end up having a pre-season that lasts three or four months.

“If we do get together it will just be to meet and talk.

“Hopefully in a couple of months we’ll be able to start the season.”