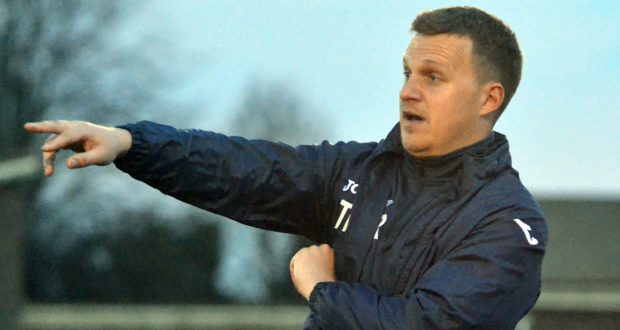 Tigers boss Tom Roberts is hoping the key to Holbeach’s success this season could be in the close-knit squad of players he has assembled.
The Carter’s Park outfit have won both of their two competitive matches so far this season.
They followed up last Saturday’s 4-1 FA Cup success at home to Swaffham by beating much-fancied United Counties League Premier Division rivals Yaxley on Tuesday night.
A solitary strike from Tommy Treacher, coupled with a disciplined defensive display from the Tigers, laid the foundations for a cracking away win.
And Roberts now wants his side to maintain their momentum in Saturday’s league trip to Cogenhoe which is followed by home Premier Division match with Sleaford on Wednesday night.
Roberts said: “Our confidence is high. We’re a close knit group and the atmosphere in the changing room is really good.
“Hopefully that will be the key throughout the season. We’ve already had a real test of character and come through it.
“I couldn’t ask for much more than two wins. It’s still work in progress really, but it will come together eventually.”
Holbeach changed their system on Tuesday night to try and quell Yaxley’s attacking threat.
Playing Stuart Eason as a lone striker and defending in numbers helped nullify a Yaxley side who had plundered 12 goals against Huntington in the FA Cup last Saturday.
Roberts added: “We knew their tails would be up after winning at the weekend and obviously they play on an artificial pitch and train on it all the time.
“We had to change our way of thinking and playing and it was very effective.
“We are going to have to do that this season when we come across sides who plays different styles, but Tuesday showed we can adapt.”
Holbeach face a Cogenhoe side on Saturday who have had a mixed start to the new campaign.
The Cooks edged home 1-0 against Berkhamsted in their FA Cup clash before losing 2-1 in their league opener at home to Oadby on Tuesday night.
It has been a summer of major changes at Compton Park though with many of last season’s Cogenhoe squad departing for pastures new and a host of fresh recruits checking in.
The bulk of last season’s Northampton Spencer squad have joined new Cogenhoe boss Tom Chapman at Compton Park.
But Roberts is taking nothing for granted against a club who traditionally do well in the Premier Division.
He commented: “It will be a tough one. It’s a hard place to go and they are always in the top six or eight.
“They will be like any other UCL side who will work hard for each other.
“They’re looking for their first league victory so it could be a potential banana skin.
“We need to go there with the right mentality, be positive and get the job done.”
Holbeach are boosted by the return of influential duo Jamie Stevens and Josh Ford who have completed two-match suspensions.
Jordan Thomas is expected to be sidelined for a couple of weeks with a hamstring injury while Ollie Pinner misses Saturday’s match but is expected to be back in contention for the Sleaford clash on Wednesday night.
Roberts continued: “Having Jamie and Josh back will make us even stronger, but we have got a good strength in depth this season.
“We’ve still got Adam Jackson to come back in as well so I will have selection headaches, but they are good headaches to have.”
2016-08-12
James Bedford