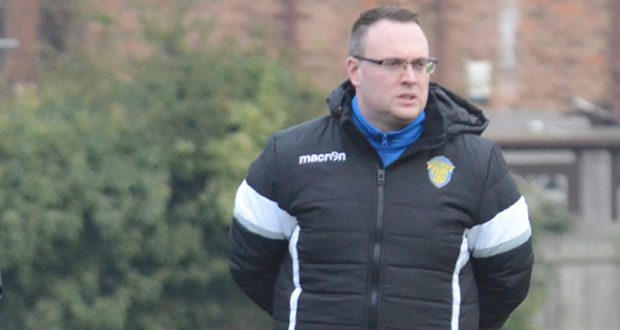 Lewis Thorogood has revealed his “honour” at being handed the role of Spalding United manager on a permanent basis.

Having stepped up as interim manager following Matt Easton’s resignation from the BetVictor NPL South East Division club back in December, former number two Thorogood will lead the Tulips next season.

It’s his first permanent role in men’s football having been more prominent in the junior scene, but the new chief is targeting an exciting future.

He will be assisted by player/coach Neal Spafford and Graham Almond, with any further additions to the backroom staff to be announced at a later date.

“Of course I’m pleased and honoured to be able to lead the club forward in a new chapter,” said Thorogood. “I have said from day one that the job is to make the club sustainable and build a squad who work hard for each other and gel.

“We want to win as many games of football as we can and that is the aim.

“I will take every competition seriously and the club and supporters crave a cup run so we will do our best to try and achieve that.

“The work begins now but of course in the climate we are in, the priority is for people to stay safe, look after one another and ensure we can look forward to the new season in due course.”

Meanwhile, Thorgood feels the Football Association will regret their decision to void the rest of the non-league season due to the coronavirus crisis.

Although the Tulips are one of those sides who are unaffected by the move given their mid-table position in BetVictor NPL South East Division, Thorogood revealed that his “heart goes out” to any teams who were in the mix for promotion.

He feels that the likes of Stamford and Peterborough Sports should be compensated for the time, money and effort they have put in – and is also disappointed that the proposed restructuring of the non-league pyramid will likely not go ahead in the wake of the coronavirus pandemic.

He said: “Let’s be totally honest, Spalding United as a club aren’t really affected much by this ruling.

“My only concern for us would be that there is a little ambiguity in the FA statement – will the new regionalised division not come in to play now? I thought we’d seen the back of ten-plus trips to Staffordshire each season.

“But that’s something we’ll have to find out about at a later date. I’m guessing that we’ll all just have to start again in the same leagues as this season.

“Look, the sensible decision is to stop playing. This virus is worse than a lot of people feared and who knows when things will go back to normal.

“What I will say is that I’m surprised the FA have denied teams the chance to be promoted. In our league you look at Leek Town and Stamford, while further up I think of the likes of Peterborough Sports.

“They’ve spent so much time, effort and money to get where they are. This ruling means that it’s all for nothing.

“You think of the extra revenue that they’d have generated from going up a level too. My heart genuinely does go out to them.

“I feel the FA has a lot of explaining to do about how they reached this decision.

“It seems a bit of a knee-jerk reaction and you have to imagine that those clubs that would have been in the promotion mix will be asking for compensation.”