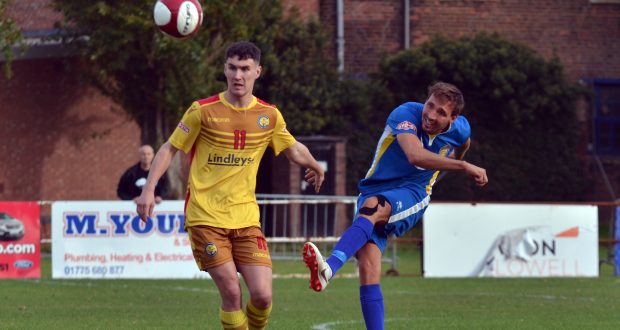 The only way is up! Boss Easton wants Spalding United to climb table after first win

Relieved Spalding United boss Matt Easton is now looking up the Evo-Stik NPL Divsion One East table after finally recording his first win in the job.

The Tulips chief looked on as his side defeated Sheffield FC 2-1 on Saturday to register a first league success of the season at the 12th attempt.

The victory was Easton’s maiden three-point haul in club management, but he’s refusing to get too carried away – with slowly climbing the table his sole goal ahead of Saturday’s home clash with seventh-placed Gresley (3pm).

“It was great to get the victory our performance deserved,” said the Spalding supremo. “But there’s still a lot for us to improve on.

“I was encouraged to see how much more solid we looked and I though the midfield – Kegan Everington, Ben Davison and Jack Brownell – were fantastic.

“Obviously it was nice to have that winning feeling on a Saturday, too.

“I’m not getting carried away. We didn’t get too downbeat when we were losing every week, so we’ll just focus on getting that next win and climbing the table.

“We’re only a point or two behind a host of sides above, so things will start looking much better if we can string a few results together.”

Easton will be hoping that win number two follows at the Sir Halley Stewart Playing Field this Saturday, against a Gresley side that have been inconsistent this season.

Although they sit seventh, they’ve been beaten five times on the road this season – a fact not lost on the Tulips chief.

He added: “They must be doing something right to be seventh. I suppose it depends which Gresley side turns up, really.

“It’ll be a tough game, they’re capable of scoring plenty of goals – but concede plenty too.

“We’ll go into the game full of confidence. Getting that win has lifted everybody, but we’re wary of Gresley’s threat.”

Despite the mood taking a turn for the better at the Sir Halley, Easton is still actively looking to add to his squad.

He has a number of seven-day notices of approach in for transfer targets and is hopeful he’ll get a couple of deals over the line.

One of those targets, Holbeach United striker Jack Smith, does have an offer on the table from the Tulips – but Easton is unsure if that one will get over the line.

The Spalding boss is adamant that he’ll only sign players with the right character and insists he won’t just sign players for the sake of it.

“We’re not desperate for signings,” added Easton. “Those that we do sign must have the right kind of character and not just want to come here for the money.

“A few of the approaches finish this week, so we’ll have a chat to a few targets and see what happens.

“Jack Smith is one person I’ve spoken too. We made him an offer – and I think he’d do really well for us – but it’s his call.”

Spalding are hoping that keeper Michael Duggan will be fit to return on Saturday, after missing the Sheffield win.

Skipper Ben Davison should also be available after turning down offers from Lincoln United and Pinchbeck United to stay at the Sir Halley.