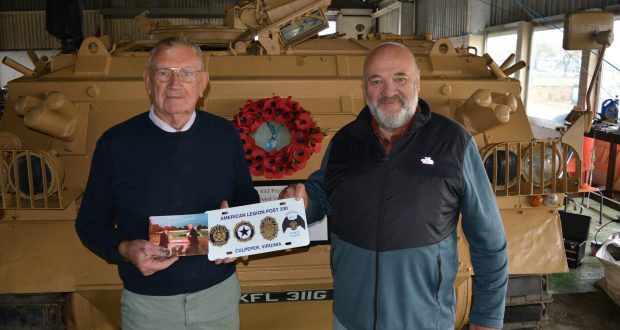 Thanks from USA veteran friends

Fleet Hargate’s Harold Payne has received a special thank-you for his support of American veterans ahead of a meeting this week about a Remembrance Sunday parade through Holbach.

The owner of the Anglia Motel received a surprise visit from Jonathan John with a plaque from the American Legion Post 300.

Jonathan and his daughter Claire Brooks, who lives in Fleet, visited the motel on a previous trip four years ago, with his sister Ann Matthews.

Ann, chaplain for the Illinois-based Post 300, returned home with pictures of the memorials, including those to American veterans.

“They were so impressed with the efforts to the memory of American soldiers and we were told to bring a plaque to say thank you the next time we go back,” said Jonathan.

Jonathan, who lives in Michigan after moving from the UK 25 years ago, after Ann married a Vietnam veteran, said: “It’s had to wait until now but it’s been great to pop-in and surprise Harold.”

“It’s unbelievable really,” Harold said. “I’m also being sent something from the Australian Legion too.”

Harold is holding a meeting to discuss the Holbeach Remembrance Parade he’s planning following a decision by Holbeach Parish Council not to hold the usual afternoon event, citing a lack of volunteers.

The meeting will take place at the motel at 2pm on Sunday, October 24.

Harold said the planned parade was set to take place before 11am so as not to clash with the Royal British Legion’s usual service in the afternoon. “So far we’ve got about 150 children, cadets and around 30 vehicles set to be involved,” he said.