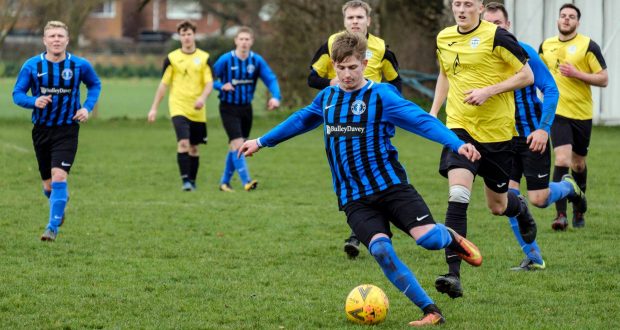 Free-scoring Jubilee returned to the top of the Spalding Sunday League table in style at the weekend – by thrashing Pinchbeck United Sports 17-1.

In the most one-sided game of any season, both Declan Earth and Luke Steele helped themselves to five goals each.

It’s now four wins from as many league games for Jubilee, a feat matched by CSKA Emneth in second.

They were on impressive form too, thrashing hosts and – at the time, table-toppers – Up The Fish Reds 9-2.

Also on 12 points, but with four wins from five, are Fosdyke after they outgunned South Holland United 5-3.

Karol Narojczyk and Kacper Pilarz both netted twice each, while Rhys Holland also notched for the third-placed hosts.

Alex Cammack, Matthew Lee and Nick Millington got the goals for the hosts, who sit two points ahead of Mulberry in fifth and seventh places respectively.

That one finished 2-2, leaving CSKA sixth and Nations second from bottom.