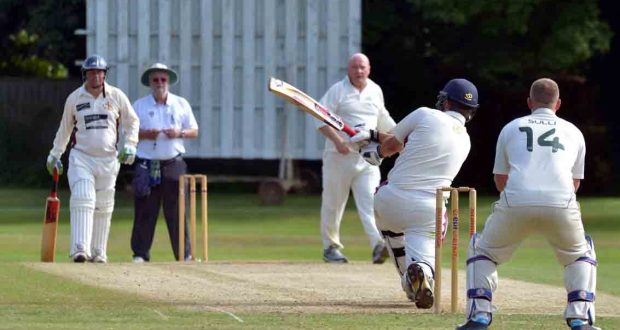 Long Sutton made it five wins from as many Rutland League Division Four East games by seeing off South Holland rivals Moulton Harrox 2nd by 84 runs on Sunday.

Pace-setters Sutton won the toss and elected to bat first at Broad Lane, racking up 282-7 from their 45 overs as Dan Oldfield top-scored with 89.

Harrox, who had Pierce Scourfield (4-43) impressing with the ball, did their best to chase down their target but ultimately came up a little way short on 198-7.

Visitors Sutton started well and made a steady start before losing young Luke Barnes (17), who was bowled by Steven Rushworth (1-62).

Aaron John soon followed for a duck after being run out by Mike Kearns Snr, but that brought Oldfield and Paul Edgeller (36) together at the crease.

Scourfield was the man to break the partnership as he clean bowled Edgeller – a feat he repeated to get rid of Oldfield later on.

Then came handy cameos down the order for Sutton, with Phil Barnes (24), Josh Baker (19) and Beau Newman (19) all making solid scores.

Scourfield came back to get rid of Baker and Newman, but unbeaten knocks from skipper Jake Burton (30 not out) and Adam Whitaker (31 not out) fired Sutton to an imposing total.

Jake Burton (1-27) ran out Carter and bowled Beale, who smacked seven fours before coming up just short of his half-century.

As well as taking the scalp of Rob Sexton (9), Crisp bowled Morton and had Kearns Snr caught to put Sutton back in the driving seat.

Scourfield (18 not out) also played a handy knock for Harrox, but the target soon became too tall – especially with Simon Juckes (1) and Clive Bayston (4) out cheaply before the close.

Sutton secured 18 point for their troubles as they moved seven points clear, while Harrox are still seeking a first win after four defeats so far this season.