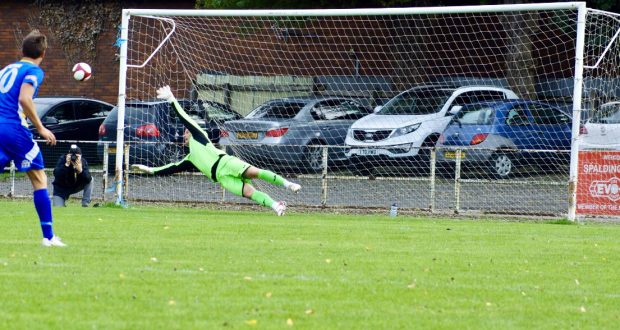 ON THE MARK: Cenk Acar's penalty finds the net. Photo by MARK GOODALE

Stylish Spalding United get off the mark with Sheffield FC success

It was celebration time at the Sir Halley Stewart Playing Field on Saturday as Spalding United recorded their first Evo-Stik NPL Division One East victory of the season by seeing off Sheffield FC 2-1.

And they did it with some style against the world’s oldest club, with their loyal fans singing their praises at the final whistle.

The Tulips, with just seven points from their previous 11 matches, finally got their act together as they played some delightful football in an entertaining encounter.

They got off to a dream start with two goals in the opening 11 minutes from the lively Cenk Acar (penalty 7) and teenage left back James Hugo (11), and held the advantage until the final minute of normal time when the visitors’ leading scorer Mitchell Dunne netted a consolation goal, via the woodwork.

It was a super team performance by the Tulips, who lined up without regular goalkeeper Michael Duggan who was nursing a ‘dead-leg’ following an injury picked up the previous week against Carlton Town.

But he had a worthy replacement in Alex Smith, who was making his first appearance of the season.

Neal Spafford and Jack Brownell were back following injuries, while Gary King and Leon Mettam were relegated to the substitutes’ bench.

The Tulips were subjected to some early pressure from the visitors – but the tables were soon reversed.

Breaking quickly from defence the ball found its way to Acar chasing down the left side.

He jigged his way past defenders before being felled just inside the area by Tyreece Robinson, and picked himself up to rifle in the resulting penalty in the seventh minute.

Just four minutes later Acar was the provider for Hugo, who gained possession and weaved a passage towards goal and beat keeper Jonathan Hedge with a low struck shot just inside the post.

Sheffield, though stunned, came back strongly. James Gregory’s far post header was just inches over the bar while Waide Fairhurst’s close range shot into a crowded home area was kept out by Smith’s legs.

But, with Kegan Everington and Jack Brownell prominent in the midfield, the Tulips worked hard, with certain skills, to hold onto their advantage.

The second half followed a similar pattern of play, with action from end-to-end and scoring chances created.

Spalding skipper Ben Davison, leading by example, was denied by the woodwork on 75 minutes and shortly afterwards saw a firm header following a free kick go inches over the bar.

He was also provider for substitute Leon Mettam, whose effort was well held by Hedge, while fellow substitute Gary King fell short from a one-on-one situation with the keeper.

In a final burst of sustained pressure Sheffield gained a consolation goal with Dunne’s low driven cross-shot helped into the net via a post.