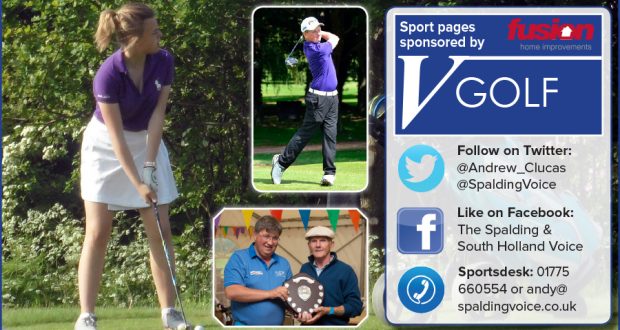 A strong Spalding first team overcame a traditionally tough test in style with a fine 5-1 away success at Stoke Rochford.

Simon Richardson and Andy Grimwood were the first pair out and came in with an excellent 3&2 win.

Robert Kedzlie and Callum Lewis were next to keep the run going with a 2&1 win while Charles Lacy and Dan Hines played the Stoke course well with a great 4&2 win.

Wayne Wallace and Harry Hunt could not hold on and went down 2&1, but Keith Hearn and partner Mark Cooley and Ollie Mitchell and his playing partner Robert McCrae both came away with 3&2 wins.

Spalding Seniors narrowly lost 5-3 in an away match at Sleaford which is always a tricky match.

This visit didn’t prove any different despite Spalding getting a fine start following a 2&1 win from captain Mike Gould and playing partner Andy Ladbrook.

Peter Bridge and Stuart Fitzjohn lost by one hole after a hard fought match, but Neil Wilkinson, who has now got his winning boots on, and his partner Dave Halfteck recorded a great 4&2 success.

Roger Davey and Steve Leggett could not hold on and lost by one hole, but the in-form Jim Dobson and Lester Pybus steadied the ship with a fine 4&3 win.

The Seniors bounced back on Monday with a 6-2 home success over Boston.

Spalding always look forward to hosting their neighbours and continued their tradition of being difficult to beat on their home course.

Vice-captain Peter Bridge and Shaun Gibson were the first pair out and started off with a fine 2&1 win.

Neil Wilkinson, who is on fire, had a resounding 5&4 win with his partner Karl Ellerbroek while Roger Davey and Alan Pritchard had a good 4&3 victory.

Jim Dobson and Lester Pybus found the going hard against a fine Boston pair and lost 3&1, however, Richard Edwards and Albert Jacobs burnt up the course with a 6&5 win.

Rod Hunt and Mike Browning had a fine 2&1 win in a hard-fought match, but the pairing of Bernard Herbert and Peter Dewar struggled against a tough Boston pair, losing out 5&4.

The final pairing of Sid Chapman and Ron Sudbury rounded off proceedings with a 3&1 win to seal another fine home victory for the Spalding lads.