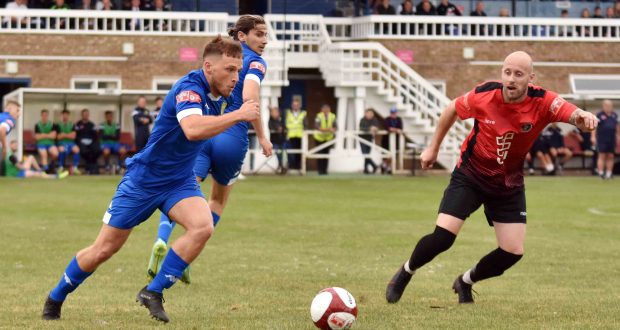 Midfielder Broccoli netted the only goal of a tight first qualifying round tussle at The Beeches after 47 minutes, clinching the Tulips a welcome £2,250 in FA prize money in the process.

The win also booked Spalding an eye-catching home draw against Vanorama National League North side Kettering Town in the next round on September 18.

For Tulips boss Gaby Zakuani, the triumph in the West Midlands was a fourth successive win in all competitions – and he was once again very pleased with what he saw.

Former Peterborough United defender Zakuani said: “Really proud of my players again, what a shift that was.

“Plenty of effort and determination to grind out the result – and another clean sheet.

“Four wins in a row, injuries left right and centre but we keep moving forward.

In what was a very tight tussle between two sides that have crossed paths in the NPL in recent seasons, Spalding had the better of the early chances without fashioning anything clear cut.

Tividale grew into the game as the half progressed, but neither side seized command.

That was, until ex-Posh winger Marcus Maddison jumped off the bench at half-time.

He whipped a dangerous ball across the box soon after the interval and Broccoli, who had scored in each of the two previous games, was on hand to bundle home what proved to be the only goal.

One negative was a nasty-looking injury picked up by Hugo Odogwo-Atkinson, who went off on a stretcher.

It remains to see if he’ll be available for Tuesday night’s Sir Halley Stewart Playing Field derby against Stamford (7.45pm).