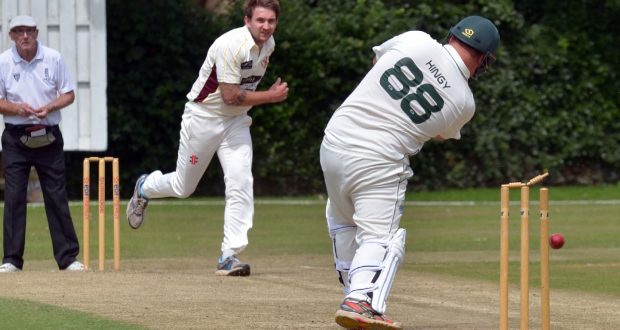 Long Sutton moved 25 points clear at the top of Rutland League Division Four East by making it six wins from as many matches on Sunday.

The pace-setters impressively bowled out hosts Orton Park for 122 in 44.3 overs, before a crucial 69 not out from Barry Stanway steered them to 123-5 in reply.

Hosts Park opted to bat first after winning the toss, but soon lost Cameron Harris (2) early on when Beau Newman (1-17) had him caught.

The carnage didn’t stop there, as Taylor Letch (0) was then stumped by Rav Sangha off the bowling of spinner Jake Burton (1-27) and John saw off Dave Lovelock (1) to leave the hosts in dire straits.

Opener Alex Edan (17) was also bowled by John, but Nick Bradbury (42 not out) played a handy innings down the order to help Orton pass three figures.

Ethan Debell (17) and Kester Sainsbury (13) also made useful knocks down the order before falling to Angus Bell (1-16) and Whitaker respectively.

That brought Stanway to the crease, with the all-rounder scoring what proved to be a pivotal half-century.

Despite James Baker (2) and Bell (2) being clean bowled by Debell and Lovelock, Ethan English (18 not out) joined Stanway to fire Sutton to their target in just 24.1 overs.

Indeed, Stanway’s unbeaten knock ensured that Sutton collected all 20 of the match points on offer and opened up a sizeable lead for his side ahead of Sunday’s trip to basement side Ufford Park (1pm).

Moulton picked up five points on Sunday due to their game at Newborough being cancelled on Sunday.

It was the same story for Town, who saw their home date with Castor 2nd rained off.