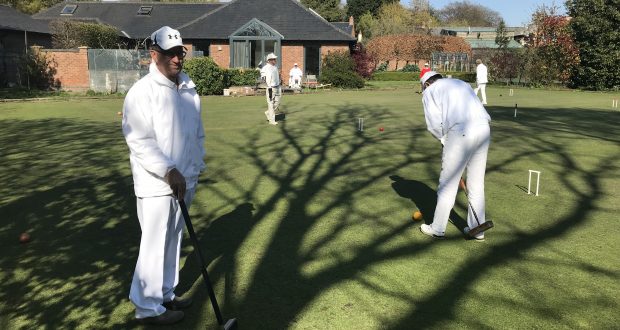 Ahead of competing in a national tournament this week, Pinchbeck Croquet Club’s Gordon Mills has stressed why you should give croquet a try.

Gordon is off to Colchester for one of the first national tournaments to be held in any sport.

Croquet is fairly easy to play socially distant, and Pinchbeck has been back playing as a club for a couple of weeks now.

It was formed four years ago by croquet enthusiast and UK ranked player Mike Bowser.

He’s produced one of the best kept croquet lawns in the country off Bear Lane in Pinchbeck.

Gordon said: “Due to the coronavirus we have missed the start of the new season and many tournaments have been cancelled.

“However the lawn is looking good and now that restrictions are being lifted, club members are starting to enjoy playing once again, subject to keeping a safe distance from each other and observing various hygiene recommendations.

“For many years I have enjoyed croquet on our lumpy lawn at home and at friends’ houses.

“The aim at these social occasions was to knock your opponent’s ball as far out the way as possible and great fun if you could get their ball in the flower bed or better still the pond!

“Once I joined Pinchbeck I soon discovered that proper croquet is not quite like that, but just as much fun and more interesting with carefully thought through tactics and a huge variety of skills needed to succeed at higher-level play.”

There are two types of croquet played known as Association Croquet and Golf Croquet.

Association Croquet has complex rules and tactics. Players can have a turn (or break, as it is called) where they can get through most of the hoops in one go.

Gordon describes it as fascinating to watch and similar to ‘watching a good snooker player make a big break’.

Golf Croquet is the popular version and much simpler.

All four players are on the lawn together and have just one shot each turn in the quick action sociable game.

Gordon continued: “Mike has gathered a friendly crowd of enthusiastic players to the club. Some go along just for fun and some enjoy it immensely but are very competitive.

“Croquet is played by a wide range of people. The reason for this is that it is a game of pure skill and tactics.

“A powerfully built player has no advantage over one less so, and croquet does not make any undue demands on stamina. The excellent handicap system enables beginners to play against much better players.

“Croquet requires the touch of a bowls player, and the skill of a snooker player in controlling the path of two balls and building up a good break, but with the advantage of being played outside.

“A great feeling of sportsmanship and camaraderie is enjoyed by players, which is far removed from the common concept of croquet as a vicious game.”

The club is looking for new members, who will be made most welcome and given excellent free coaching.

Dress code is very casual at practice games, but whites are worn for tournaments. The club has spare mallets and equipment for newcomers to the game.