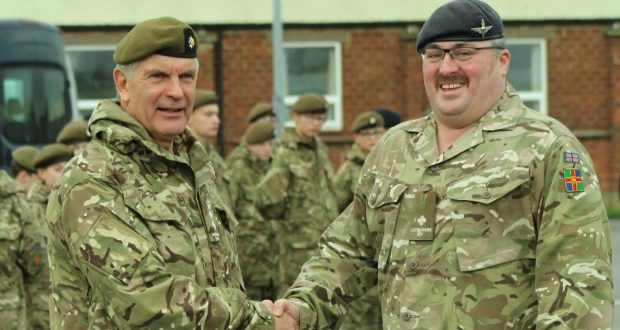 Rob Gibson (right) receives his promotion by Colonel Newmarsh, honorary Colonel for the Lincolnshire Army Cadet Force in front of a county parade.

A volunteer who has helped thousands of youngsters in Spalding through the Army Cadets has received a special promotion.

Second Lieutenant Robert Gibson, of Lincolnshire Army Cadet Force’s Spalding Detachment, has been promoted to Officer Class after 30 years with the organisation.

The now 42-year-old was 13 when he first joined as a cadet himself, before continuing as a volunteer, including taking on roles such as Detachment Commander and Regimental Sergeant Major.

His 17-year-old daughter Molly Gibson is just finishing her stint as an Army Cadet herself.

Rob, who works at Framework in Spalding, which aids homeless people, said: “I enjoy working with teens.

“Army Cadets is not just about uniformed services, it’s about life skills, and I enjoy teaching new skills to the cadets. It’s just a nice way you can make a difference.

“We’ve had a lot of cadets in the last 17 years who have gone on to join the forces or who are doing really good jobs and they are still in touch and tell us how they’re doing. I suppose I must have overseen a thousand plus youngsters and hopefully I’ve made a difference to some of them.”