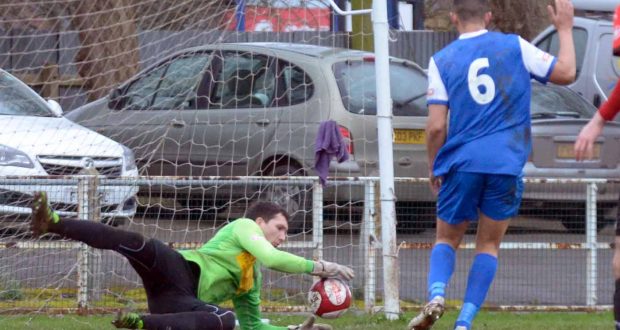 The Tulips’ bid to secure a favourable play-off position wasn’t hindered by the Sir Halley Stewart Playing Field defeat, but Rawlinson doesn’t want it to trigger an untimely slump.

Spalding go into Saturday’s home clash with Belper Town (3pm) in third place, which would be good enough for a home draw in the play-offs.

That’s the top goal for Rawlinson’s side now, with the boss feeling that an average of two points from their remaining nine games would get the job done.

He’s wary of the threat posed by 11th-placed Belper, who have caused play-off rivals Newcastle Town and Leek Town problems in recent weeks – but is eyeing up a win.

Rawlinson said: “After a defeat, the best thing you can do is get back in the saddle and move onto the next game.

“We need to put the Witton defeat behind us and focus on getting the points we need to clinch a play-off position.

“The result on Saturday was never really going to affect us too much. We have a nice cushion to those below, but can’t afford to rest on our laurels. We’ve always said that the target is effectively to take two points a game, so we’re still on track.

“Belper at home is the kind of game we have to be looking to win. A draw isn’t disastrous for us, but I’m mindful that we’ve soon got a run of five games in 12 days to deal with.

“A few of the lads used to play for Belper, so there’s an extra edge for them. I went to see them a few weeks ago against Witton and they are clearly a good side.

“I think we can exploit a few of their weaknesses, but we’ll have to be on our game for sure.”

Spalding welcome back left back Adam Jackson and attacker Conor Higginson to their squad, but are still without suspended duo Nathan Whitehead and Neal Spafford.

Keeper Michael Duggan will make his 200th appearance for the Tulips if selected.