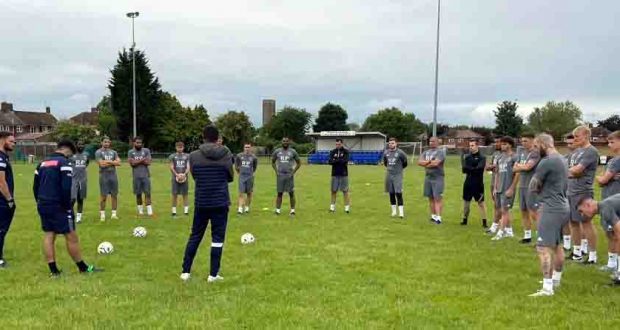 Spalding United’s pre-season schedule was given a major boost on Monday night as former Premier League winger Yannick Bolasie made an appearance.

Bolasie, who Everton paid Crystal Palace £25m for as recently as 2016, was there to share his knowledge as a personal favour to Tulips boss Gabriel Zakuani.

The pair, who are close friends, used to play international football together with DR Congo – and there is no suggestion that Bolasie, who spent much of last season on loan at Middlesborough in the Championship, will agree a shock deal to play in the NPL next season.

But it’s fair to say that Bolasie’s presence made waves on social media on Monday night.

The ex-Everton ace said: “Gaby and I have been friends for years and I wanted to come and help the Spalding lads out and pass on some knowledge.

“It was very enjoyable.”

The Tulips returned to pre-season training on Saturday, which took place at Peterborough Northern Star’s base due to lack of access to the Sir Halley Stewart Playing Field.

They were put through their paces by Zakuani and his staff ahead of what promises to be the most exciting season in their recent history.

Speaking on Sunday, Zakuani said: “It was great to see the buzz at yesterday’s session, boys put through their paces, but also made it fun and enjoyable.

Among those at training was another new signing in the shape of Jordan Macleod.

A prolific scorer and a creator of many goals during his time with the likes of Peterborough Sports, AFC Rushden and Diamonds, Wisbech Town and Deeping Rangers, he’s the perfect fit for what Zakuani’s Spalding will be trying to achieve next season.

With the likes of Marcus Maddison, Nathan Stainfield and Gregg Smith already signed on for next term, it’s another statement of intent from the Sir Halley-based side.

Tulips boss Zakuani added: “I’ve done my research and he is a perfect fit for the type of player I’d like at the club.

“A talented addition who has proven himself already at this level and his hardworking attitude will see him fit into the club right away.

“He is another very talented player who will add another dimension to our attack. I have had him in with a group of our players doing extra training in the last few weeks and I am very pleased with his attitude and dedication.”

Macleod, who can play on the wing and in attack, is perhaps best known for being a part of Jimmy Dean’s Peterborough Sports side.

He helped them climb the non-league ladder before moving on to a goal-laden spell with Deeping.

Last season saw him turn out for Wisbech before COVID-19 curtailed the season, but he’ll now line-up against the Fenmen in the NPL next season.

Macleod added: “I know people at the club and I am well aware of what’s developing here at Spalding United and I am very keen to be a part of it. It’s the right move for me and I cannot wait to get started.”

Meanwhile, tickets are still available for the pre-season friendly fixture against Peterborough United on July 28 (7.30pm).

Vist www.spaldingunited.net and click on the relevant link to secure your ticket.