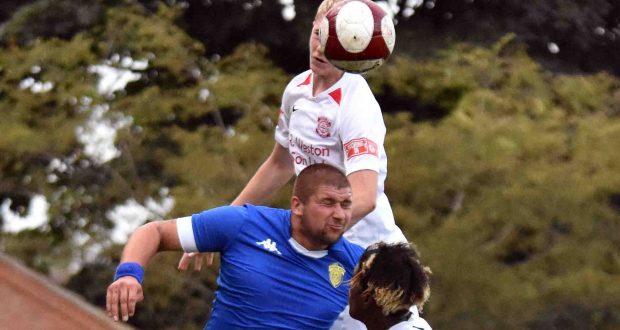 Spalding United responded to their first defeat of the season in impressive style as they cruised to a 3-0 Emirates FA Cup victory at Brantham Athletic on Saturday.

Goals from Gregg Smith (4), Chris Assombalonga (22) and Scott Floyd (63) secured the Tulips’ progress in the Preliminary Round clash in Suffolk – and booked another away trip to Tividale in the next round on September 4.

“I’m a really bad loser, you have to take the good with the bad. But this was a well deserved win in the FA Cup, we played some fantastic stuff with great energy, the fans were superb.

“A brilliant away day.”

It was striker Smith, always an imposing presence, who powered the Tulips ahead inside the first few minutes.

The hosts were then lucky not to have Matt Hayden sent off for a shocking tackle that could have seen him head for an early bath.

The hosts then blew a golden chance to level the scores when they dragged a penalty wide of Michael Duggan’s goal.

Undeterred, Spalding doubled their money when Assombalonga converted number two from a corner midway through the half.

The Tulips had a better handle on their opponents after the break and they saw things out nicely.

There was, however, still time for right back Floyd to net his second of the season.

He benefitted from a long ball forward and finished superbly well.

Spalding will be travelling to the West Midlands in the next round to face a Tividale side they have battled numerous times in the NPL over recent seasons.

However, their scheduled league game against Soham Town Rangers tonight (Tuesday) was postponed due to Soham needing to play an FA Cup replay against fellow Pitching In NPL Midlands Division side Corby Town – who are Spalding’s next opponents this Saturday.

The Tulips will make that trip to Corby without Spencer Weir-Daley, who has left the club. Ex-skipper Lewis Brownwhill has also joined rivals Cleethorpes.