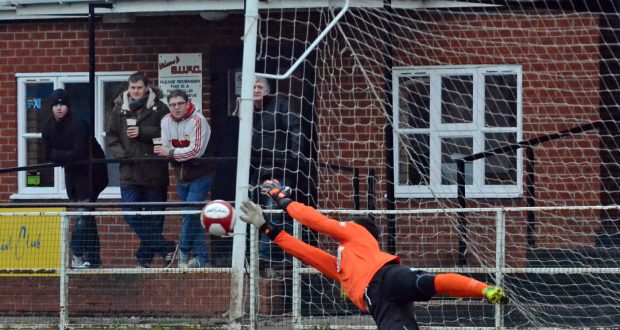 Spalding United boss Matt Easton is targeting a first away win of the Evo-Stik League Division One East season on Saturday as they once again take on Gresley.

Having drawn 2-2 with the Moatmen at the Sir Halley on Saturday, the Tulips face the same opposition this weekend (3pm).

Although Easton doesn’t like the idea of playing the same team back-to-back, he’s confident his charges can go one better than they managed last week.

“It’s a bit weird to play a side back-to-back in the league,” said Easton. “I’m not sure I like it, but we can’t do much about it.

“For us, it’s tough as it’s two games against a side in the top six or seven.

“We’ll probably look to make a few changes to the side just to mix it up.

“That being said, I thought we did quite well on Saturday. A draw was the least we deserved on the day.

“We do need to be careful of them on the break, though. We knew they’d be quick, but they were even quicker in the flesh.

“We’ll certainly go there looking for a win, we proved on Saturday that we can more than match them.”

Having moved up to 18th place after taking four points from the last two games, the Spalding boss is happy with the improvements he’s seen on the pitch. But he’s still looking to add to his squad.

“Obviously I’m still looking to add a few new faces to the squad.

“We’ve identified the areas that we want to improve, but we’ll take our time. I don’t want to waste the club’s money.

“Tempting players to play for the club is tricky, but we’ll keep trying.”

Easton has keeper Michael Duggan fit again for the trip to Derbyshire and will expect to re-take the number one jersey from deputy Alex Smith, but striker Gary King is unavailable.

Saturday’s draw saw Gresley climb up to sixth in the table – and they’ve been formidable at home this season, winning four of their six games, losing just once.