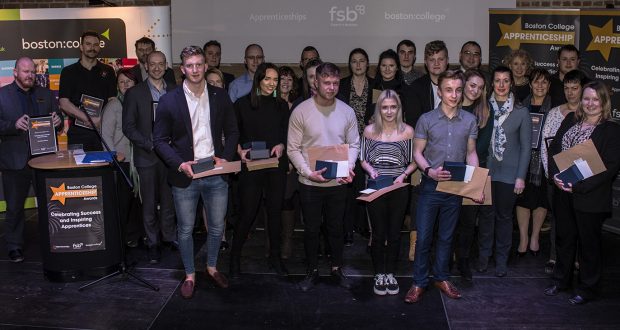 Apprentices from Spalding were among those recognised for their bright futures by Boston College.

The Apprenticeships Awards were handed out in a recent ceremony overseen by BBC Radio Lincolnshire presenter Melvyn Prior.

Russel Dalton, Stephen Shea, Simas Vaupas and Liberty Studd, all from Spalding, were among the winners.

Since starting his apprenticeship in 2014, Russel has excelled in both ability and confidence. With on-going support from his employer JD Parker, he also managed to achieve level two in maths, English and ICT, having started without any prior grades in these subjects.

Russel’s assessor described him as the “dark horse” of the group due to his evidence being of excellent quality with an outstanding portfolio.

Mentors describe how he will help peers without prompting and he supports all within his group, showing both an enthusiasm for engineering and a willingness to support and learn at the same time.

The motor vehicle apprentice of the year was Simon Vaupas. Simas started at Boston College: Spalding in 2014 on level one Vehicle Maintenance, advancing to level two full time then progressed onto level three full time. He achieved his level three then gained an apprenticeship at CARS.

Staff describe him as a polite, hardworking and kind young man who always has good reviews from colleagues, staff and customers.

Finally Liberty Studd was named the Apprentice of the Year for beauty.

Liberty has made excellent progress while on this apprenticeship and is embedding the theory knowledge gained in college while working on clients in the salon.

The college says she has shown a high level of customer service and communication skills and is an excellent team worker. Liberty’s confidence in her ability has improved since she started on the course.

Her employer comments that Liberty has a great attitude to work and is already responsible for a client base, working well with all colleagues, and always being on time for work.
Spalding Special Schools Federation and Lincolnshire County Council were among the employers whose efforts towards apprenticeships.