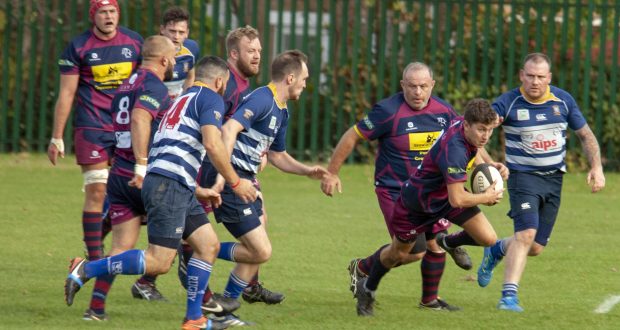 CRUCIAL SCORE: Will Shields (right) was one of Spalding RFC's try scorers on Saturday. Photo by ADRIAN SMITH

Both Jordan Templer and Ash Piccaver were ordered off the field late on, but earlier tries from Will Shields and Harry Cole gave Town an all-too-rare success at old foes Mansfield.

The triumph sees the Elephants go fifth in the table, some ten points off the promised land of second spot.

Playing uphill in the first half, Spalding started positively – taking the game to Mansfield with a combination of good carries by the forwards and scrum half Ben Shields zipping the ball out to his backs.

As a result, the hosts had to defend deep in their half and conceded a number of penalties near their try line.

But with a missed penalty and determined Mansfield defence, Town failed to capitalise on their pressure.

The home side soon turned defence into attack and, with two successive lineouts on Spalding’s five metre line, Mansfield were looking to turn their possession into points.

However, stout defence and excellent tackling by forwards Ash Ankar and Kev Hudson – with Dan Adams and Tom Wilson in the backs also closing down space – the home team were denied any scoring opportunities.

With the game ebbing and flowing and neither team gaining a decisive upper hand, the Elephants claimed the lead after 25 minutes of play. With the wind making life difficult, John Barrett found Piccaver in a shortened lineout.

Harry Sharman was lying out in the backs and with a turn of speed, gained 30 metres and passed out to flanker Will Shields to go over.

With the try converted, Spalding boasted a seven-point advantage.

Confidence was now high and Town pushed Mansfield off the ball at the next scrum, but the hosts were working their way down into the corner on the five metre line.

With a lineout win, the home team drove for the line and set up a ruck ready for the forwards to pick and drive. Town defended well denying Mansfield, but the referee called Jordan Templer offside on the blind side of a ruck by half a step, not directly involved in play, which was on the open side, awarded a penalty try and yellow carded Templer.

With a strong bench available, Spalding captain Dan Adams brought on forwards Ryan Chappell and Tim Waltham, who replaced Piccaver and Ben Shields, meaning Will Shields moved to scrum-half at half time.

With the game all square, Spalding now had slope advantage – but within a couple of minutes they were caught offside. A successful penalty kick duly put Mansfield into the lead.

Town then stepped up their game and pinned Mansfield deep in their half.

Sharman took a quick tap and go penalty and Chappell was stopped on the line but the ball was recycled and Cole went over out wide to edge Spalding back in the lead by two points with 25 minutes still to play.

During the first half the referee had been extremely tolerant with Mansfield, as they conceded numerous penalties and constantly disputing decisions.

Rather belatedly, a yellow card was shown to Mansfield number eight, but again poor execution and ball retention by Town meant they failed to take advantage.

Full-back Conall Mason was being tested by Mansfield, kicking deep and chasing down.

But he stood up well to the pressure in defence and George Brown came off the bench to replace Tom Wilson in the backs.

With the final minutes of the match remaining Spalding again surrendered territorial advantage, which sparked the Mansfield camp that they could steal a victory through their forwards.

Competition became intense and Templer received a second yellow and departed from the field.

Next Kev Hudson was forced off with a back problem and Piccaver was back on, but within a few seconds he also received a red card.

Mansfield kicked the penalty to the five metre line for their final lineout, but it was stolen by excellent work from Waltham and Spalding’s first away win of the season had been secured.

This Saturday sees Town welcome runaway leaders Nottingham Casuals (15 wins from 15 games) to the Memorial Field (2.15pm) for what promises to be a real cracker.