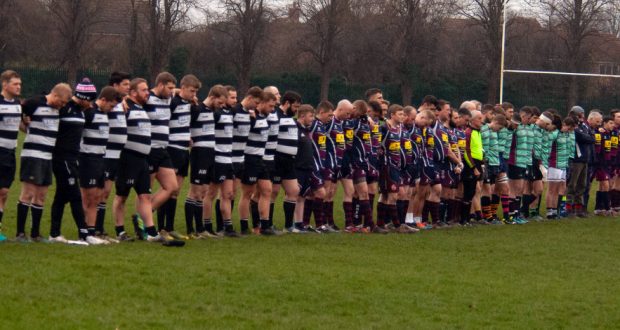 RESPECT: Players from Spadling RFC, Spalding RFC Nomads and Belper stand for a minute of silence to show their respects for the late Clive Benson, who had captained Town in the early 1970s and who died just before Christmas. The Nomads went on to lose against Spalding's former Colts (now at University) in the Geof Nichols Cup. Photo by ADRIAN SMITH

Spalding RFC showed no sign of rustiness in their first Midlands Three East fixture in more than a month as they held second-placed Belper to a 10-10 draw on Saturday.

Fifth in the table at the start of play, Town’s last outing was the 22-7 success over Sleaford on December 1 – but they managed to outscore their promotion-hunting visitors by two tries to one in a close game at the Memorial Field.

It was Belper who controlled much of the first half, but the Elephants had the first real opportunity to get on the scoresheet when the away side offended at the breakdown.

However, a relatively simple penalty kick was put wide by Willis Ingleby.

Tackling and defensive duties were the order of the day for Town, with Tim Waltham and Harry Sharman leading the way in the forwards and captain Dan Adams working well alongside Tom Wilson to close Belper’s backs down.

Strong running around the breakdown area with successful offloads was gaining territory for Belper, with Spalding being forced into defending their line on several occasions.

Finally, at a ruck ten metres out from the posts, Town’s defence was non-existent and the visitors ran in unopposed for the opening try.

With a simple conversion following, a seven-point lead was well deserved.

The visitors also had good running backs and, with plenty of possession, they were starting to show their pace.

While tackling, Ash Anker took a knock to his shoulder and was replaced by George Berry in the forwards.

Crucially, Belper then missed a penalty kick and shortly afterwards their outside centre was yellow carded.

With a kick into touch and a successful lineout, Spalding drove the maul towards the line but lost possession.

But, with a one-man advantage, the hosts kept pressing and finally the ball was moved out onto the left wing and Gav Sharman was over for an unconverted try.

That meant that when the half-time whistle sounded there was just a two-point difference between the teams.

During the break, coach George Reid decided to have a complete reshuffle in the scrum. 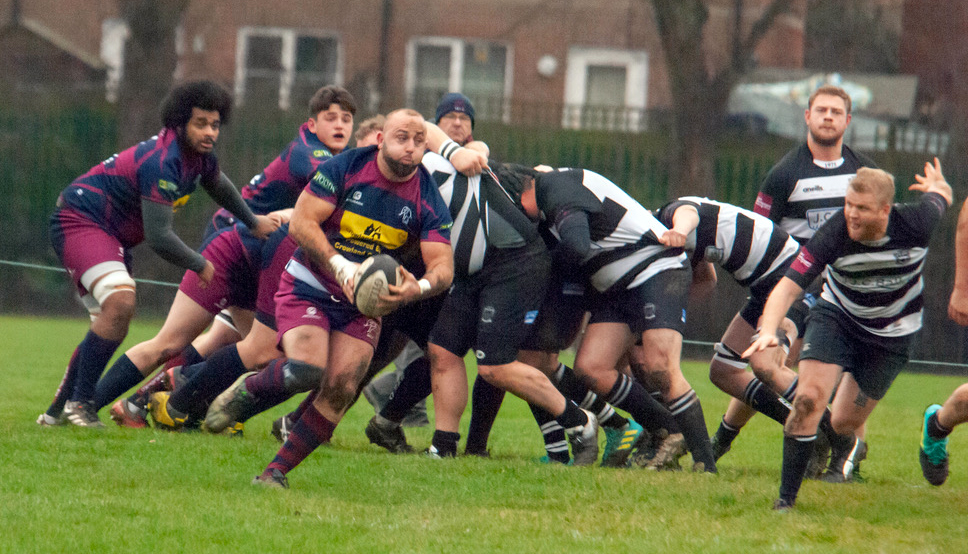 TOP SHOW: Harry Sharman on the ball on Saturday. Photo by ADRIAN SMITH

That handed Belper an advantage at the set-piece, but increased Town’s threat around the park with Ryan Chappell coming into the back row.

Within a few minutes Jason Steels was also off the bench and into the scrum, with Waltham taking a knock.

Spalding then started to impose their game on the visitors, with play being mainly in Belper’s half.

But it was a tough physical battle in the forwards, with George Berry making some effective carries and Harry Sharman also prominent.

When they could, Town were looking to spread the ball wide to the wingers.

Full-back George Douglas was returning Belper’s kicks upfield with forceful runs and a try looked to be on – only for the last pass to go astray just a yard from the line.

Typically, it was the away team who edged further into the lead with 15 minutes left on the clock thanks to a successful penalty.

At this stage, the referee was starting to award penalties to Spalding with Belper disputing decisions.

Scrum-half Will Shields capitalised with quick tap penalties, which started to bring rewards either gaining territory or a further penalty.

Town were pressing but found the away defence impenetrable until Harry Sharman slid a precise grubber kick through for Shields, who followed up and dived over to level the scores with the conversion to come.

Once again, however, the kick was missed to leave the Elephants dreaming of what might have been.

The final few minutes saw both teams going for the win, but with no further score the match ended all square.

The draw earned Spalding two points, which moved them above Buxton – Saturday’s opponents (away, 2.15pm) – and into fourth place in the table.