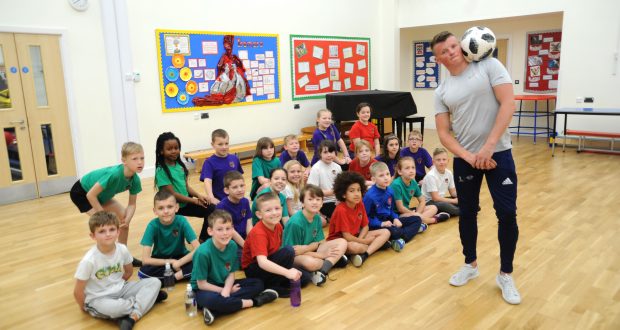 Spalding kids get a kick out of footballer

Monkshouse School is not a footballer’s usual stop off before appearing at the Champions League Final.

But that’s where freestyle football star Jamie Roberts was last weekend ahead of his trip to Kiev where he will be providing the warm-up before Liverpool v Real Madrid.

Before performing alongside Cristiano Ronaldo, Mo Salah and James Milner though, last week he was showing off and passing on his skills to the youngsters from the Pennygate school.

Jamie, who is originally from Belfast, wowed the youngsters before the school assembly who were then allowed to ask him questions.

The youngsters were then given sessions and tutorials on how to do some of the skills.

The school’s PE co-ordinator Danny Roberts said: “The kids have learned a range of exciting new tricks to use and show off to their mates.

“We’re delighted to be able to welcome someone who is going to showcasing his skills at the Champions League Final to the school.”