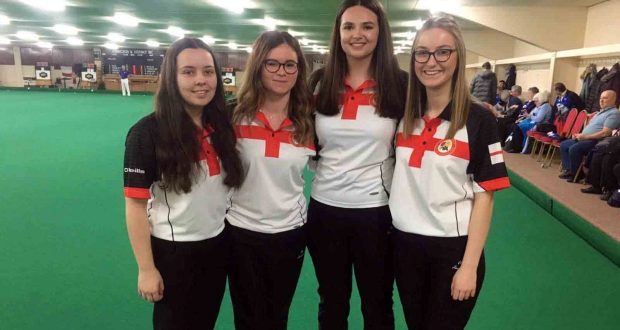 The first match of the series saw England face Ireland, which resulted in a comfortable 114 shot (152-38) win and saw Hill’s rink finish strongly to score 21 shots without reply over the last seven ends to win 40-9.

The afternoon session on the first day delivered another win for England, this time against Wales by 64 shots (103-39).

The hosts Scotland also beat Ireland and Wales on the first day to set up a winner-takes-all match against England on the Sunday in the final match of the series.

England started exceptionally well and were soon 20 shots ahead by the half way mark.

Despite Scotland’s best efforts, England were far too strong as they closed out another win, this time by 51 shots (103-52).

Impressively, Hill’s rink made it three wins from three as they won 28-12.

The series win was made even more impressive for England as they won all twelve rinks over the weekend en-route to lifting the Acle Trophy for the third successive year.

Although Smith and Whyers received a bye in the last 32, all four Spalding players safely progressed through to the last 16 as Ekins beat John Holroyd (Stamford) 21-16 and Needham beat David Portanier (Scunthorpe) 21-8.

The last 16 saw more Spalding progress as three of the four players negotiated wins through to the quarter finals.

The quarter finals saw some closer matches but Smith got through to the semis with a hard-fought victory against Adam Warrington (Stamford) 21-16.

An all-Spalding encounter decided another semi-finalist as Ekins beat Whyers 21-18 to set up a repeat of last season’s final against club mate Smith.

Both games will be played at county semi-finals day, which will take place at Spalding’s Castle Sports Complex base on Saturday, March 28.