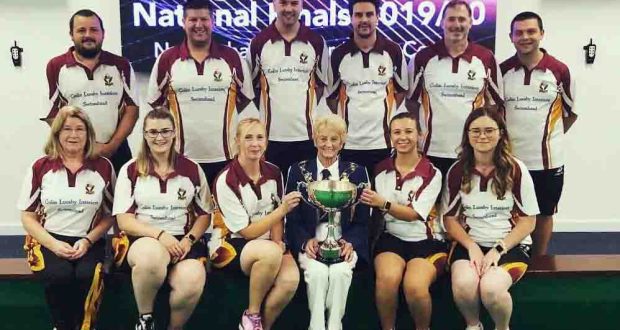 They become only the third club in history to win the title on more than one occasion, having previously clinched the crown back in 2015.

The format of the competition consists of men’s and ladies’ singles, mixed pairs, mixed triples and mixed fours.

The singles are worth two points each, while the pairs, triples and fours are all worth four points apiece.

The final stages were held at Nottingham Indoor Bowls Club, where they were actually completing the 2019/20 championships before the COVID-19 pandemic hit.

Indeed, before the pandemic Spalding played a series of qualifying rounds to set up a semi-final clash with the Egham club from Surrey.

The first points on the board were by Spalding’s Chelsea Tomlin in the ladies’ singles, as she won 21-12.

They soon added the men’s singles when Stephen Harris won comfortably 21-4. With four points on the board, this meant that Spalding needed only one win from the pairs, triples and fours and win the overall aggregate to secure their place in the final.

This is exactly what happened, as Ruby Hill and Jordan Philpott found their opposition in top form in the pairs, while Jean Patterson, Lauren Finbow, Graham Smith and Mathew Orrey lost in the fours with the last bowl of the game.

With the aggregate safe after two comfortable wins in the singles, this meant that the triples of Andy Dunham, Annie Dunham and Martin Spencer had to win – which they did 21-17.

The match score was actually 8-8 however, but Spalding won 87-77 on aggregate.

Elsewhere, St Neots beat Exonia by an even closer margin (91-87 on aggregate) to complete the final line up for the following day.

There was an array of junior and senior internationals on show and the final was expected to be of the highest quality.

In the final, the men’s singles was actually played first and Harris got Spalding off to the best possible start with another comfortable 21-13 win.

With the match close overall and the pairs, triples and fours only half way through their respective matches, the ladies’ singles was always going to be crucial for both teams.

Tomlin fell behind early on but strung together some excellent ends to lead 19-18. With the crowd on the edge of their seats, Tomlin held her nerve to collect the final two shots, win her match 21-18 and effectively put one hand on the trophy.

The equation was the same as the semi-final, but the Spalding players and supporters could soon relax when the pairs and fours secured their discipline wins and the championship win for 2019/20.

The Spalding triples were actually 16-11 behind with three ends to play. However, with the match out of St Neots’ reach, the concession was made.

The overall match score was 12-4 to Spalding and they were also 92-70 up if aggregate was needed.

As with the top club, this was a competition which should have been completed in 2020 however, COVID-19 again put it on hold.

Lincolnshire were always going to be favourites in the final having won the competition no fewer than eight times – and there was certainly no surprise when they made it nine.

Lincolnshire stamped their authority from the outset and soon found themselves 20 shots in front.

Spalding’s internationals, Hill and Tomlin played as a back end with Gloria Davies (Sleaford) and Louise Harris (Stamford) as they secured the top winning rink by a margin of 32-9.

The win was made even more impressive as the county did not lose a rink, winning four and drawing two in the final.

p Spalding Indoor Bowls Club also got their men’s county league season off to the perfect start by winning on three of the four rinks and secure a comfortable win at home to Grantham last Saturday.

The overall match result was 91-67 and 12-2 on points. After joining from Stamford and playing in his first game for the club, outdoor international, Tristan Morton skipped his rink of Mike Robertson, James Teesdale and Ean Morton to a top winning rink score of 31-12.

Dominic McVittie and Kevin Ekins also skipped their rinks to wins, while Graham Hicks and his rink found their opposition in top form to narrowly lose.

Even though the VPs are a strong side, they were no competition to Spalding on the day with the home team securing a comfortable 119-88 victory, winning on four of the six rinks.

The rink of Doris Rawding, Jan Sinclair and Mick Jennings had the best win, while captain for the day was Roger Perkins.

They then played an away friendly fixture at Sleaford, chipping away at an early deficit before closing out a comfortable 110-95 win.

Top rink was Jennings, with Sinclair and Abs Belding, while captain was Perkins again.