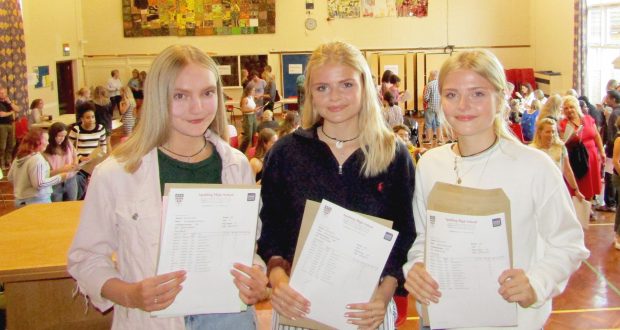 Alice Wickham (left) earned eight nines, an eight, seven and A*. She's pictured next to twins Grace and Jessica Wood. Grace (left) recorded five nines and Jessica (right) four. They're all staying on to do A Levels at the High School. Spalding High School. GCSE Results Day 2018.

A host of Spalding High School pupils were on cloud nine after amassing a host of top grades.

In all 141 students achieved 1546 GCSE qualifications with almost of these at grades nine to seven, which is the equivalent of an A* to B in the old system.

A number of students The Voice spoke to were looking to medicine, including Arpa Jahan who picked up eight nines and three eights.

Medicine and neuroscience are the fields that Sai Gayatri Sivakumar  is looking to get into.

She said: “I’m very happy with my results. They weren’t what I was expecting and I’ve been very worried.

“Neuroscience seems like a good field to get into and I would like to get into research.”

Two sets of twins picked up results. Grace and Jessica Wood got a total of nine nine grades between them as they get ready for further studies at the school’s sixth form.

Both Emma and Charlotte Chiverton are also stopping on for A Levels. “I did a lot better than I expected,” said Charlotte who was particularly pleased with a nine in RE while Emma’s results included three eights and four sevens.

The day was especially special for Ellie Blackbourn as it was also her 16th birthday.

“I was worried as it was always going to fall one of two ways,” she said after finding out she had earned three nines and an eight and before a day trip to the beach to celebrate and results party at night. “I’d eventually like to do something in Germany such as go to university there.

“My dad’s a German teacher and we go there every year and I love it there.”

Headmistress Michele Anderson, said: “We are very pleased with the GCSE results that our Year 11 students have achieved this year.

“The students should be as proud of themselves as we are them.

“Initial progress analysis would indicate that students have worked hard to achieve the aspirational targets we have set them and exceeded their expected progress. We are thrilled for them all.

“This is a lovely cohort of young people who have worked incredibly hard over the last five years to do so well at the High School. They approached the examination period with resilience, having to sit a far higher number of examination papers than previous years have done.

“They have been rewarded with grades that will stand them in good stead for the next step in their education.

“These GCSE results remain a testament to the very high standards set at the High School and to the hard work of all students and staff, supported by parents and governors.”