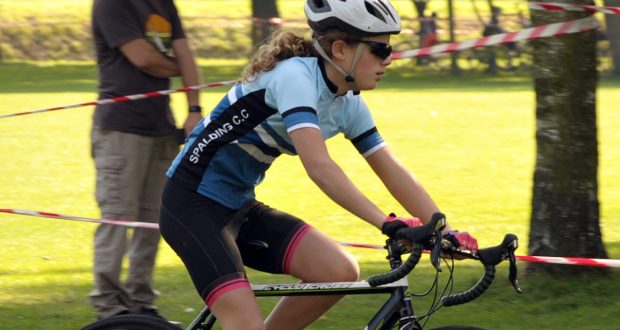 With Spalding Cycling Club’s trial season is winding to a close, their riders are turning to other competitive forms of action to get their fix.

The club was represented at the annual grass track festival at Mildenhall in Suffolk, with Velvet Bowser leading the way. As the only girl competing, Bowser had to race in the Juvenile Omnium B against the boys.

She battled well, but was narrowly pushed into third spot.

The following day saw the senior men and ladies’ races. Rob Mcalinden competed in the men’s events but, did not have the best of days and failed to get on the podium.

In the ladies’ events Tilly Gurney competed in the 800km National Championship which yet again was won by Jo Smith of Thanet Race team.

Gurney picked up sixth spot and then went on to win the ladies’ non-prize winner consolation race.

The club were fortunate that the program included a round of the men’s national 800m Championships.

More than 60 entrants were spread over a variety of events on the day, with entrants coming from all over – including some from Scotland.

In the boys’ youth C race, Spalding’s Jack Bowser took a hard-earned top spot, but in the girls’ race sister Velvet had a crash and had to withdraw.

In the boys’ youth A event, Ben Norton – who has only just come back to cycling after a lay-off – raced well to pick up fifth spot.

In the senior races, Tilly Gurney had a good day as she took second spot in the 800m sprint and third in the elimination race.

This was followed by a win in the 400m handicap and third in the scratch 12-lap race.

In the men’s races, Rob Mcalinden was the only Spalding competitor and had a mixed day.

He managed third in the 400m handicap, but was less successful in his other rides – placing 11th out of 15 in the elimination race, joint eighth in the unknown distance (riders race for a set time) and 13th out of 15 in the National 8km endurance.

There were some top class riders taking part and Charles Fletcher (from Scotland) made his trip worthwhile by winning the national 800m championship, elimination race and national 8km endurance, as well as placing second in the unknown distance and seventh in the 400m handicap.

The event, organised by Simon Hare, was a huge success with numerous members combining to ensure everything worked smoothly.

The race involves cycling the Carrington straight and New York/Coningsby straight, where there is very little escape from the effect of the wind.

The only club competitor was Neil Palmer who put in an excellent ride, averaging 26.6mph to take fourth.